Coronavirus News: Fairfax Co. votes to increase substitute teacher pay | Is it time to get a COVID-19 booster? Which one? | Local cases of COVID-19 | How many in DC region are vaccinated?
Home » NHL News » Sabres, minus Eichel, open…

Sabres, minus Eichel, open season with 5-1 rout of Canadiens

BUFFALO, N.Y. (AP) — At 40 and opening his 19th NHL season, Sabres goalie Craig Anderson has been around long enough to realize it’s not about what star players a team might be missing, or how inexperienced the roster.

“I think first and foremost, it’s not what you don’t have, it’s what you do have, and that starts with our leadership,” Anderson said, following a 30-save outing in Buffalo’s stunning 5-1 season-opening win over the injury-depleted Montreal Canadiens on Thursday night.

“We are a team that’s young, can skate fast and is going to make mistakes, but they’re going to do it out of passion,” he added. “I think we’ve got a little bit of naiveness right now, too, where we’re just going out there and playing what we’re told to do.”

For one game, the Sabres put aside a tumultuous offseason, by overcoming questions of lacking offense and with deposed captain Jack Eichel’s future in Buffalo uncertain. Eichel was stripped of his captaincy last month and remains on injured reserve over a dispute with the team over how to treat a herniated disk which has sidelined him since March.

“The work we put in in camp is what carried over to this game. That’s our identity and we got to work hard,” said Girgensons, who missed all of last season with a hamstring injury. “I don’t think it would’ve mattered who scored the first two goals.”

The Sabres converted three of six power-play opportunities, with Tage Thompson pushing Buffalo’s lead to 5-1 early in the third period.

While Buffalo looked nothing like the team that finished last in the NHL standings for the fourth time in eight seasons last year, the Canadiens didn’t come close to resembling the team that reached the Stanley Cup Final, before losing in five games to Tampa Bay in July.

Montreal was coming off a 2-1 season-opening loss at Toronto on Wednesday, and opened a season 0-2 for the first time since 2000.

Chris Wideman scored and Sam Montembeault stopped 31 shots in his Canadiens’ debut after being acquired off waivers from Florida two weeks ago.

“We understand the reason we have success and what we have to put in to get the results. We didn’t do that tonight. They deserved to win, they got the result that they deserved,” Canadiens forward Brendan Gallagher said. “You don’t want to put yourself in a hole. So obviously to start 0-and-2, there’s a lot of urgency on the next one.”

The fallout from the Sabres’ offseason player purge, Eichel’s dispute and 10-season playoff drought was evident with the NHL announcing — not the Sabres —- a crowd of 8,467 scattered around an arena with a 19,200 capacity. One fan showed up early wearing a paper bag over his head and an Eichel jersey.

The Sabres rewarded those who did attend by showing no signs of wilting after Wideman tapped in Joel Armia’s pass midway through the second period.

Olofsson scored shortly after a two-man advantage ended by snapping a shot from the right circle with 2:55 remaining in the second period.

Girgensons then played a key role on Bjork’s goal. After blocking a shot in Buffalo’s end, Girgensons led a three-on-two break before having his initial shot stopped, with Bjork converting the rebound to the right of the net.

Whatever the attendance, Okposo welcomed the fans who showed up after the Sabres spent all but a few home games last season playing in an empty arena due to COVID-19 restrictions.

“Obviously not to full capacity, but the energy in there, like the chants in the third and the wave, they had the wave going,” Okposo said. “It meant a lot. I was fired up when I scored.”

Sabres coach Don Granato had no update on center Casey Mittelstadt, who did not return after sustaining an upper body injury midway through the second period.

The Sabres were in Montreal preparing to face the Canadiens on March 10, 2020, when the NHL paused its season because of the coronavirus pandemic. The season was canceled two months later, with Montreal clinching the Eastern Conference’s 12th and final playoff berth .007 percentage points ahead of Buffalo.

Before the game, the Sabres aired a video paying tribute to Rene Robert, a member of the team’s famed 1970s-era French Connection line, who died following a heart attack in June. Robert’s No. 14 was also imprinted on the ice behind both goals.

Canadiens: Return to Montreal for home opener against the New York Rangers on Saturday. 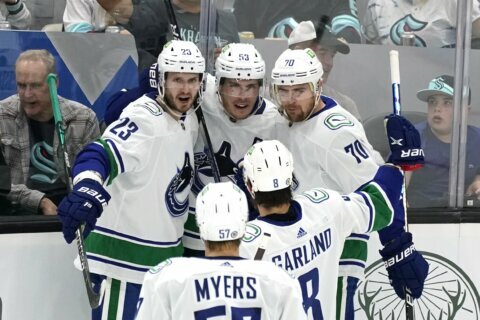 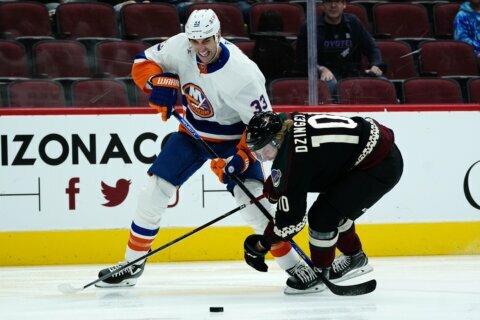 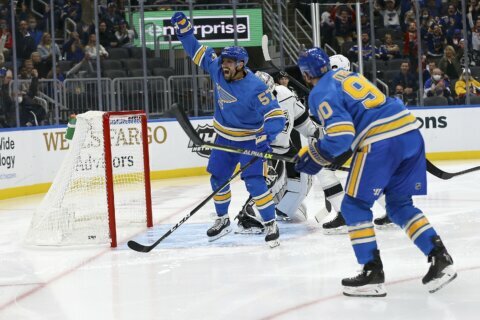