Markstrom stopped 45 shots for his second shutout in his last three starts, and the Flames beat the Pittsburgh Penguins 4-0 Thursday night.

“We have a long flight,” Markstrom said. “It always (stinks) to travel after a loss. It was huge, obviously.”

Markstrom recorded his second shutout in five games this season and the 10th of his career. Playing his 12th NHL season and second with the Flames, Markstrom has stopped 136 of his last 137 shots faced.

Johnny Gaudreau scored his first goal in the opening period, and Blake Coleman, Dillon Dube and Milan Lucic scored in the third as Calgary swept a five-game trip. The Flames never trailed during the road trip, leading for 234:05 overall, and outscored the opposition 21-7 on the trip.

Calgary hasn’t lost in regulation since the season opener in Edmonton. The Flames are the third team in NHL history to sweep a road trip of five-plus games while never trailing in each contest, joining Chicago in 1996 and St. Louis in 2017.

“To end this trip on a good note, (then) it’s a great road trip instead of just a good one,” Markstrom said. “That’s a big win and something to build on.”

Casey DeSmith, who made his first start since Oct. 14, stopped 31 shots for Pittsburgh. The Penguins have lost two straight after starting the season with points in their first five games.

Coleman gave Calgary a 2-0 lead just 1:04 into the third period when his point shot through a crowd beat DeSmith. Mikael Backlund recorded an assist for his 400th NHL point.

Dube continued a three-game point streak with his first of the year at 10:15, and Lucic scored his second of the season 1:29 later, at 11:44 of the third.

Gaudreau put a shot over DeSmith’s glove on a breakaway for his first goal of the season at 7:22 of the opening period.

Coleman was whistled for high sticking at 12:15 of the first period and defenseman Erik Gudbranson a four-minute double minor for the same penalty at 12:34. That gave Pittsburgh a two-man advantage for 1:41, but the Penguins came up empty, as the Flames held a 1-0 lead through 20 minutes. Calgary outscored the opposition 11-0 during the first period of its five-game trip.

“Obviously, we’d like to score there,” Penguins’ coach Mike Sullivan said of the 5-on-3. “It potentially could be the difference in the game if we do. I thought the guys had a significant amount of looks.”

Markstrom kept it a 1-0 game entering the third period with a desperation diving stick save on Penguins forward Drew O’Connor during a scramble in front of the net in the second.

“I saw it on the replays in the intermission and I realized he made that save,” Gaudreau said. “Just a crazy, crazy incredible save.”

Mangiapane has six goals in his last five games, while Lindholm has seven goals and eight points in his last seven.

Mangiapane had a chance to set a franchise record for the longest goal streak to open a season. In his last 18 games overall, including the IIHF World Hockey Championship where he won gold and was named tournament MVP for Canada, Mangiapane has 19 goals, including eight game-winners and 23 points.

Gaudreau extended a six-game point streak with his first-period goal.

Gaudreau’s 504 points are 10th all-time in franchise history, just one behind Gary Roberts. Gaudreau is also tied with Kent Nilsson for eighth in team history with 333 career assists. He’s two back from Paul Reinhart for seventh.

Penguins’ captain Sidney Crosby participated in an optional skate on Thursday morning, but he still has yet to make his season debut.

Crosby, who underwent wrist surgery last month, has participated in the team’s last three full practices. He returned to the first line and joined the top power play for the first time during Wednesday’s practice.

Crosby and Evgeni Malkin (knee surgery) have not played in the team’s first seven games. Pittsburgh also played Thursday without D Kris Letang and F Jeff Carter, both in the COVID-19 protocol, and F Bryan Rust, who is week-to-week with a lower-body injury. 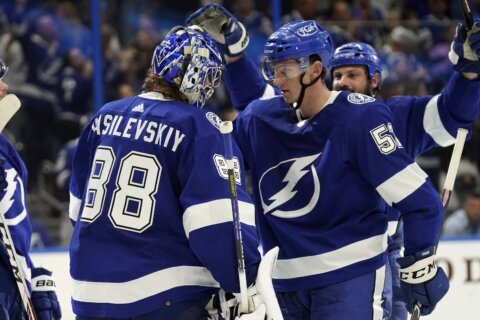 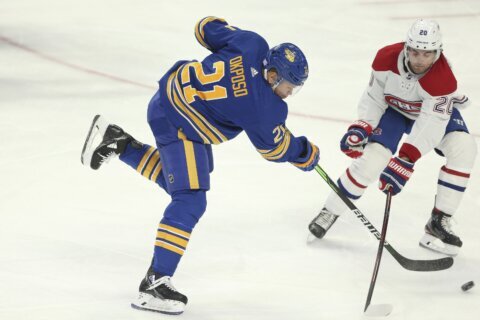