ANAHEIM, Calif. (AP) — Grizzled veteran Phil Kessel supplied the the tiebreaking goal for Arizona, but a couple of rookies also played huge roles in the Coyotes’ 4-2 victory over the Anaheim Ducks on Friday night.

Lane Pederson scored in his NHL debut and Jordan Gross, who had only one assist in five career games, had three assists after being called up from the minors.

“We were looking for some juice and that is what they supplied,” Arizona coach Rick Tocchet said. “Hopefully it builds confidence but the next step is build consistency.”

Johan Larsson and Nick Schmaltz also scored for the Coyotes, who have won four of their last five games to move back into the final playoff spot in the West Division. Adin Hill made 27 saves.

Alexander Volkov, who was playing his first game for Anaheim, and Jakob Silfverberg scored for the Ducks. Anthony Stolarz stopped 27 shots in his second start of the season.

Pederson made it 2-2 midway through the second when he took advantage of Christian Dvorak’s pass into the zone taking a wild bounce off the corner board near the zamboni entrance. The puck found Pederson right on his stick near the goal and he slid it past Stolarz.

Pederson was signed by the Coyotes as an undrafted free agent and spent three seasons with Arizona’s AHL affiliate before being called up to the taxi squad last week. He found out Thursday night that it was likely he was going to be in the lineup.

“I showed up at the rink and my number was on the board,” he said. “On the goal I got a lucky bounce, tried to make a move on the goalie and it worked. It was tough to put that goal and the emotions into words. To see it go in I was like did that really happen?”

Kessel was credited with the go-ahead goal after his pass deflected off Volkov and into the Anaheim net to give the Coyotes a 3-2 lead. Schmlatz, who has a point in four straight games, provided some breathing room with three minutes remaining on a wrist shot from near the right faceoff circle.

Volkov was acquired from Tampa Bay on March 24 but couldn’t make his debut until Friday due to a seven-day COVID quarantine. He scored with 3:53 remaining in the first period when he took Max Comtois’ pass in front of the crease and tapped it into the net.

Volkov had only one practice with his new team before the game, but coach Dallas Eakins thought he made a good first impression.

“It was great to see him score. He looks like he is fairly responsible and overall I think it was a good start for him,” Eakins said.

After Volkov’s goal, Larsson tied it two minutes later when he raced up the right side of the Ducks’ zone and beat Stolarz high on his short side with a wrist shot.

Silfverberg gave the Ducks a 2-1 lead less than five minutes into the period after the puck went off his right skate and into the net. Replay upheld the referee’s call that the forward did not make a distinct kicking motion to score the goal.

“We had enough chances to win the game. We have to find a way to bear down and bury them,” Eakins said. “Stolarz was solid. A couple of those goals were just unfortunate bounces. There’s nothing to critique there. He certainly earned that start tonight.”

Anaheim’s Ryan Getzlaf suffered an upper body injury during the second period and did not return.

The Ducks and Coyotes wrap up their season series on Sunday. 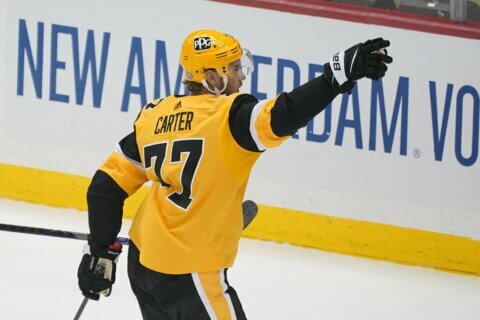 Jarry rebounds with 39 saves, Pens even series with Isles 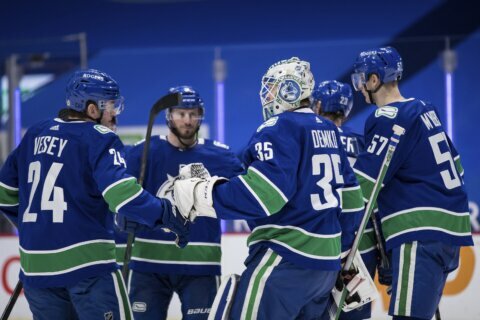 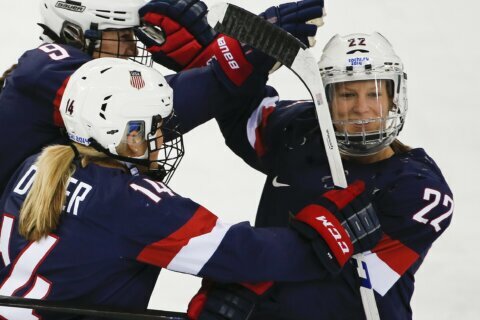