NASHVILLE, Tenn. (AP) — The Tampa Bay Lightning made sure Curtis McElhinney’s first start in net since last March went as smoothly as possible.

Anthony Cirelli scored two goals for Tampa Bay, and the Lightning beat the Nashville Predators 4-1 on Monday night for their fifth straight victory.

Tampa Bay controlled this game even with goaltender Andrei Vasilevskiy getting his first night off this season. McElhinney made 22 saves.

“I think it was an ideal start for our team,” Lightning coach John Cooper said. “To have as little work as he had in the first period, I think that was probably good for him.”

The defending Stanley Cup champs extended the NHL’s longest winning streak and improved to 8-1-1. The 2009-10 Pittsburgh Penguins are the only defending Cup champs since 1943-44 with more wins (nine) through the first 10 games of a season.

McElhinney said there were a lot of question marks on his end going into this game.

“Obviously, that’s a long time to be out,” McElhinney said. “A lot of practice time obviously in the bubble and now in this season. It was just a matter of getting acclimated as quick as I could. I thought the guys did a tremendous job helping me out in the first couple periods especially.”

Blake Coleman and Steven Stamkos each had empty-net goals in the final 98 seconds.

Nashville’s Dante Fabbro scored his first goal of the season on the man advantage at 11:08 of the third. Only a strong performance by goalie Pekka Rinne kept the Predators in the game with the Lightning outshooting them 35-23.

The Predators met after the game to talk things over.

“We’re not winning right now, so we’ve got to do something extra within the group of guys we have in that locker room to get ourselves back on the right foot here,” Fabbro said.

Cirelli came in with two goals this season, and he put Tampa Bay up 1-0 with a slap shot at 9:07 of the first period. He made it 2-0 with the Lightning on the man advantage. Mikhail Sergachev’s shot hit off the left post and ricocheted to Cirelli, whose wrister from the angle easily beat Rinne.

Entering Monday, Tampa Bay had been the only NHL team to rely on a lone goaltender this season.

Dating back to last season, Vasilevskiy started the Lightning’s previous 35 games, including last season’s 25 playoff games in Tampa Bay’s run to the Stanley Cup. It’s been 11 months since someone not named Vasilevskiy saw action between the pipes for Tampa Bay. McElhinney played against Detroit on March 8, 2020.

McElhinney was unavailable to the Lightning for almost two weeks, beginning Jan. 16 when he was placed on the NHL’s COVID-19 protocols list. He was removed from the list on Jan. 29.

Nashville debuted its version of the NHL’s “Reverse Retro” jerseys Monday night. The new jerseys feature gold as the predominant color, consistent with the home jerseys that have been gold since the 2011-12 season. The “Reverse Retro” jerseys also feature silver shoulders in a nod to Nashville’s sweaters from its inaugural season.

Nashville paired navy helmets with the new jerseys. The team fully transitioned to all gold as the dark helmet beginning with the 2016-17 season.

The Predators are scheduled to wear the alternate jerseys six times this season.

The Predators placed center Ryan Johansen on the injured reserve list Monday with to an upper-body injury.

Johansen, who usually centers Nashville’s top line along with wingers Filip Forsberg and Viktor Arvidsson, last played Thursday night in Florida against the Panthers. He picked up one assist in that game in 11:09 of ice time while sitting out the third period.

Defenseman Mattias Ekholm was scratched with a baby on the way, and forward Michael McCarron made his Nashville debut, playing in his first NHL game since April 7, 2018, when he was with Montreal.

The Predators and Lightning play again Tuesday night for the second half of their back-to-back set, the fourth game between the teams in 11 days. 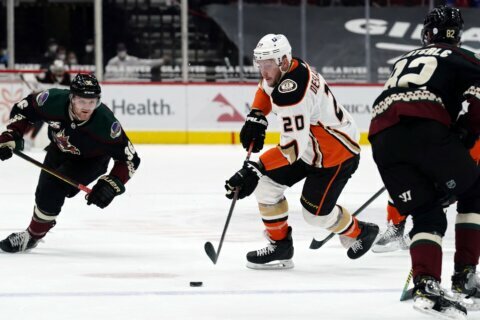 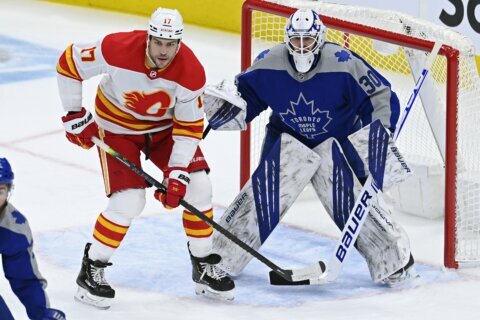