Phil Kessel, Coyotes bounce back with 5-3 win over Sharks

GLENDALE, Ariz. (AP) — Phil Kessel’s first season in the desert did not go as planned.

Expected to give Arizona a huge scoring boost, he instead struggled with injuries and his production suffered.

It’s just two games into the season, but it seems Phil the Thrill is back.

Kessel scored two goals, Antti Raanta stopped 31 shots and the Coyotes bounced back from an opening loss to beat the San Jose Sharks 5-3 on Saturday.

“It’s good to get off to a good start after last season,” Kessel said. “It couldn’t have gone worse for me personally, so it’s nice to start good and hopefully I can continue.”

The Coyotes pulled off the biggest move of the 2019 season by acquiring Kessel from Pittsburgh. The Coyotes have regularly been among the NHL’s lowest-scoring teams and Kessel had been one of the league’s most productive players, scoring at least 60 points eight times during his career.

Kessel never lived up to expectations, in large part due to injuries, finishing with 14 goals and 24 assists in 70 games.

The 33-year-old worked hard during the short time off since the NHL bubble and it has paid off. He scored the tying goal in the closing seconds of the opener and had goals in each of the first two periods Saturday.

“When you’re in a little bit of a slump, it’s tough,” Coyotes coach Rick Tocchet said. “When those type of guys get goals early, they start to feel it. You get hot. I’ve seen him get hot for two, three weeks at a time and hopefully this is one of those times.”

Arizona got off to a slow start before coming to life late in a shootout loss to San Jose on Thursday night.

Kessel got the Coyotes rolling on Saturday and they kept pushing downhill.

Timo Meier had a goal and an assist, and Martin Jones allowed five goals on 24 shots for the Sharks. Ryan Donato and Tomas Hertl also scored.

“I thought we played better structure and together than we did in the first game,” Sharks coach Bob Boughner said. “We’re looking for that timely goal.”

San Jose won the opener of the two-game opening series 4-3 in a shootout Thursday night. In that game, the Sharks jumped out to a 2-0 lead in the first period, but Arizona scored two goals in the final 3:30 — one by Kessel with 3.2 seconds left — to force overtime.

San Jose went up early again in the rematch, scoring on a power play 3 1/2 minutes in when Donato tipped a shot by Timo Meier.

Kessel didn’t wait as long for the tying goal, scoring on a backhanded shot on a power play midway through the first period. Hayton then gave the Coyotes their first lead of the season, beating Jones stick side on a shot that hit the crossbar.

Meier tied it less than two minutes later when his cross caromed off a skate out front past Raanta late in the period.

Kessel scored again in the second period, tipping a shot by Oliver Ekman-Larsson from the right circle. Chychrun made it 4-2 with a shot from above the left circle Martin had trouble seeing through traffic.

Keller, who scored the first of Arizona’s two late goals Thursday, gave the Coyotes a three-goal lead by scoring on a rebound early in the third period.

“We created a lot of good chances, but we gave up too many chances,” Sharks center Logan Couture said. “But it’s the second game. We’ve got to build off the good things we did.”

Ekman-Larsson tied his career high with the three assists, but took a big hit against the boards by Evander Kane in the third period. The Coyotes’ captain appeared a bit groggy and was bleeding from the face before being helped off the ice. He did not return.

“I think he hit his face or something,” Tocchet said. “Hopefully, it’s not much.”

Arizona won 55% of the faceoffs in the first game, but it didn’t pay off. The Coyotes upped it to 64% in Saturday’s game and it helped trigger their offensive explosion.

“It’s something we’ve got to get way better at,” Boughner said. “”We struggled in the faceoff circle, even in the first game.

San Jose: Plays the first of two games at St. Louis on Monday.

Arizona: Plays at Vegas on Monday for the first of four straight games against the Golden Knights. 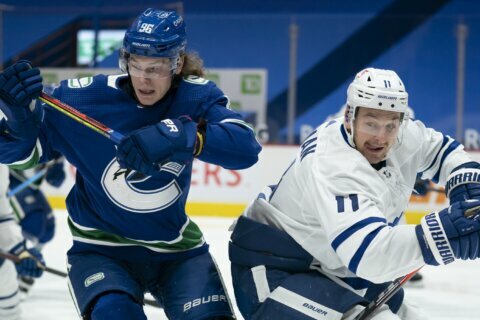 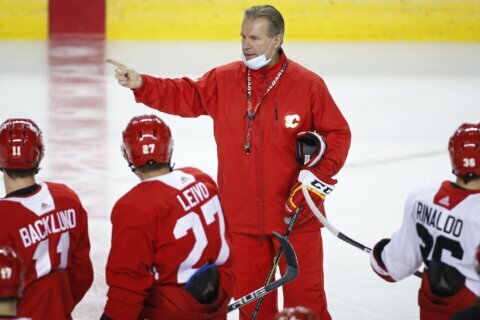 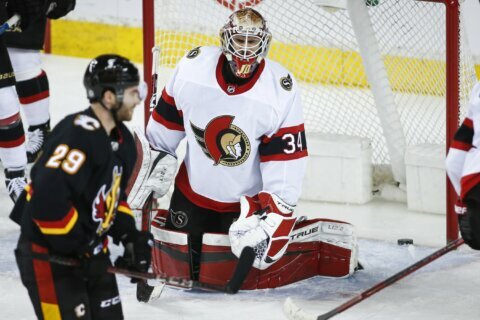