Bills safety Damar Hamlin was released from a Buffalo hospital on Wednesday, more than a week after he went into cardiac arrest and had to be resuscitated during a game at Cincinnati, after his doctors said they completed a series of tests.
Listen now to WTOP News WTOP.com | Alexa | Google Home | WTOP App | 103.5 FM

Nine days after he stunned and saddened his teammates by going into cardiac arrest and being resuscitated on the field in Cincinnati, and placed the NFL on hold, Hamlin was released from a Buffalo hospital on Wednesday, the Bills announced.

“We have completed a series of tests and evaluation and in consultation with the team physicians, we are confident that Damar can be safely discharged,” Dr. Jamie Nadler said in a news release issued by the team.

This marks the next major step in what doctors have called Hamlin’s remarkable recovery, which came two days after he was deemed healthy enough to be transferred from the University of Cincinnati Medical Center to the Buffalo General Medical Center. Nadler said the 24-year-old Hamlin will continue his rehabilitation with the Bills.

The Bills and Nadler did not disclose the results of the tests Hamlin had over the past two days in Buffalo to determine the reason his heart stopped after he struck squarely in the chest by Bengals receiver Tee Higgins while making what appeared to be a routine tackle. Hamlin collapsed during the first quarter of Buffalo’s since-canceled game at Cincinnati on Jan. 2, a chilling scene that played out in front of millions on television.

“That just shows the type of kid that he is, how he’s fought and he’s continuing to win,” Bills left tackle Dion Dawkins said. “There’s no place that he would rather be than in his own bed, so blessing to him.”

As Hamlin’s recovery progressed, the Bills and the NFL’s messaging switched from “Prayers for Damar 3” to “Love for Damar 3” by last weekend, when the entire league honored Hamlin, who wears No. 3. The Bills and their fans capped an emotionally draining week with a 35-23 regular-season-ending victory over New England.

“It’s an awesome feeling. And we’re just hoping that he’s getting his rest and recovery,” quarterback Josh Allen said Wednesday after practice, where the Bills (13-3) prepared to host their division rival Miami Dolphins (9-8) in a wild-card playoff game on Sunday. “As a team, we’re extremely happy.”

As much as players want to see Hamlin in person, Allen cautioned that moment might have to wait to allow Hamlin to gain his strength.

“Just making sure he’s taking it slow, and obviously trying to get back to being himself,” Allen added. “So we’ll take all the time that we need. But I hope he knows the guys are ready to see him.”

Coach Sean McDermott said it would be up to Hamlin to decide when to visit the team, saying: “We’ll welcome him back as he feels ready.”

Hamlin spent his first two days in hospital under sedation and showed no signs of neurological damage upon being awakened on Jan. 4. By Friday, he was breathing on his own and walking and appeared by videoconference in a team meeting, where he informed the Bills, “Love you boys.”

On Sunday, Hamlin was live-tweeting during the Bills’ victory, with doctors joking he tripped numerous alarms around the intensive care unit while watching teammate Nyheim Hines return the opening kickoff 96 yards for a touchdown.

Following his transfer to Buffalo, Hamlin posted a note on Twitter that read: “Special thank-you to Buffalo General it’s been nothing but love since arrival!” while asking his followers to keep him in their prayers.

His doctors said Hamlin’s progress in recovering from cardiac arrest, considered a life-threatening event, has been normal to accelerated.

In the days that followed, $8.6 million in GoFundMe donations poured into Hamlin’s toy drive fundraiser, which will be used to support young people through education and sports.

Hamlin, who is from the Pittsburgh exurb of McKee’s Rock, also will use proceeds from the sale of new T-shirts, emblazoned with “Did We Win?” along with his hands in the shape of a heart, to raise money for the trauma center in Cincinnati that initially treated him. 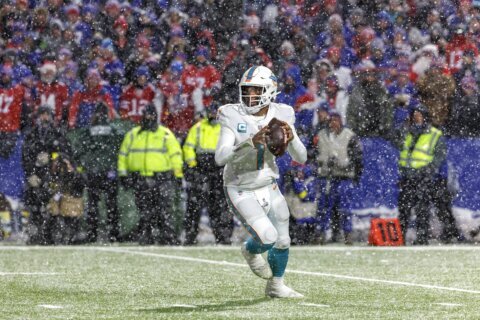