LAKE FOREST, Ill. (AP) — The Arizona Cardinals come in with the best record in the NFL, a perfect mark away from home, and maybe some fresher legs following a bye.

No matter who they have suiting up or where they’re playing, they continue to rack up wins. The NFC West-leading Cardinals will try to keep it going when they visit the struggling Chicago Bears on Sunday.

“I think the guys are very focused,” quarterback Kyler Murray said. “Focused on finishing this thing out the way we would like to, going into, hopefully, making a playoff appearance.”

The Cardinals (9-2) won two of three games prior to their bye — beating San Francisco and Seattle on the road with a loss to Carolina at home in between — even though Murray (ankle) and three-time All-Pro receiver DeAndre Hopkins (hamstring) missed all three games. Both players returned to practice on Wednesday, but they are the biggest question marks for a team that simply keeps on winning.

Arizona is 6-0 on the road, with all six wins by 10 points or more. The Cardinals are the third NFL team to accomplish that feat along, with the 1968 Cowboys and 1936 Bears.

Chicago (4-7) lost five in a row before Cairo Santos kicked a game-ending field goal at winless Detroit on Thanksgiving. That capped a week in which coach Matt Nagy was answering questions about his job status.

Andy Dalton threw for a Bears season-high 317 yards against Detroit in his first start since Week 2 with Justin Fields sidelined because of cracked ribs. Fields returned to practice Wednesday for the first time since he was hurt in the loss to Baltimore on Nov. 21. But the rookie, who remains Chicago’s No. 1 quarterback when healthy, is out Sunday.

“We got the win,” Nagy said. “And now the next focus is on Arizona. This is a really, really good football team that we’ve gotta be completely locked in. It’s a reset now to go 1-0 and you never know how things go for the rest of the season. .. We have a big challenge here and our guys, they’re competitive.”

Murray said missing games for the first time in his NFL career has been tough, but there have been some benefits. He said watching from the sideline as backup quarterback Colt McCoy led the Cardinals over the past three games allowed him to see things up close from a different perspective.

“I think when you’re back there playing quarterback there’s a lot of moving parts, things are moving faster than they may seem,” Murray said. “And then watching it from the sideline, everything slows down, and you see it for what it is. I definitely think I took something away from it.”

Santos’ field goal against Detroit ended an 18-play drive that ate up 8 1/2 minutes. And unlike the previous two games, there was no time for Chicago to relinquish the lead. The Bears drove for late go-ahead touchdowns in losses to Pittsburgh and Baltimore.

Chicago is averaging just 16.3 points and ranks 29th in the NFL in scoring.

Arizona’s defense has been one of the league’s best through 12 weeks, allowing 18.4 points per game. It’s quite a turnaround for a group that was ranked among the NFL’s worst in 2019. The Cardinals improved significantly in 2020 and then took another jump this season.

Vance Joseph has been the defensive coordinator all three seasons. He’s mixed a few holdovers – safety Budda Baker and edge rusher Chandler Jones – with some promising young players such as linebacker Isaiah Simmons, safety Jalen Thompson and cornerback Marco Wilson. They’ve combined to form a well-balanced unit that’s particularly good against the pass but also solid against the run.

Bears linebacker Robert Quinn got some recognition for his bounce-back season.

The veteran was chosen NFC Defensive Player of the Month after making 5 1/2 sacks in three games. That included a career-high 3 1/2 against Baltimore.

Quinn is tied for fourth in the NFL with 11 sacks after finishing with just two last season — his first in Chicago.

“This year, I’ve been trying not to let the unnecessary weight or negativity weigh me down, keep it off my plate,” he said. “This year, I’ve just been able to have fun, been able to bond with the guys more, turn it into a brotherhood. So I think just that alone allows me to play more comfortable and fast and make plays.”

Bears receiver Darnell Mooney continues to emerge as a top target, with back-to-back 100-yard games. A fifth-round draft pick from Tulane in 2020, he had 123 yards against Detroit after going for 121 against Baltimore. That gave him three games this season with more than 120 yards. Mooney leads the Bears in receptions (46), yards receiving (694) and touchdown catches (three). 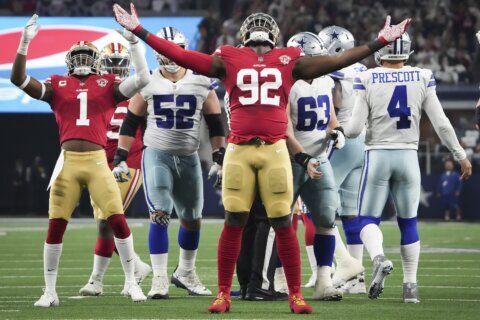 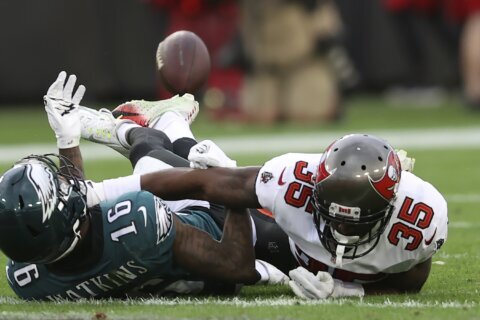 Eagles have a long way to go to compete for championship