DETROIT (AP) — The Lions finally found a victory when Jared Goff threw an 11-yard touchdown pass to Amon-Ra St. Brown as time expired, lifting previously winless Detroit to a 29-27 win over the Minnesota Vikings on Sunday.

Not only was the finish dramatic, it was stunning. Goff led the Lions on a 75-yard decisive possession without a timeout after Kirk Cousins threw a go-ahead 3-yard touchdown pass to Justin Jefferson with 1:50 left. The Vikings failed on a 2-point conversion for the third time; those missed opportunities proved costly.

Goff threw two touchdown passes in the first half to put Detroit ahead by 14 points, its biggest lead this season. Then he turned over the ball twice in the second half to help Minnesota rally.

He came through in the end, leading the long drive and delivering a sharp pass to the rookie receiver, who took advantage of the Vikings secondary playing too deep in the end zone.

The Vikings (5-7) hurt their chances of earning a wild-card spot in the playoffs by losing a game they were favored to win by a touchdown — and led until the very last tick of the clock.

CHICAGO (AP) — Kyler Murray threw for two touchdowns and ran for two more in his return from an ankle injury.

The Cardinals (10-2) got back Murray and three-time All-Pro receiver DeAndre Hopkins after both players missed three games because of injuries, then rolled to an easy victory over Chicago (4-8). The NFC West leaders, who have the NFL’s best record, intercepted Andy Dalton four times.

The Cardinals, who were coming off a bye, improved to 7-0 on the road, with each win by 10 points or more.

Jalen Thompson and Budda Baker picked off passes that deflected off the intended target on Chicago’s first two possessions. The Cardinals took advantage.

ATLANTA (AP) — Tom Brady threw for 368 yards and four touchdowns — two of them to longtime favorite target Rob Gronkowski — and the Buccaneers moved to the brink of clinching the NFC South title.

The Bucs (9-3) won their third straight game and pushed their division lead to four games over Atlanta, Carolina and New Orleans (all 5-7) with five games remaining.

Brady improved to 10-0 in his career against the Falcons, including four straight wins over the last two seasons since moving from New England to Tampa Bay.

The 44-year-old Brady completed 38 of 51 throws, including touchdowns of 27 and 11 yards to Gronkowski — their first scoring passes since Week 2 against the Falcons. The prolific duo has combined for 90 regular-season TDs, passing Phillip Rivers and Antonio Gates for No. 2 in NFL history. Only Peyton Manning and Marvin Harrison have more, hooking up for 112.

Brady shook off a huge blunder in the final minute of the first half, when 278-pound defensive lineman Marlon Davidson picked off a short pass and glided 3 yards into the end zone for a touchdown that cut Tampa Bay’s lead to 20-17 at the break.

PITTSBURGH (AP) — Pittsburgh thwarted a 2-point conversion attempt after Lamar Jackson’s touchdown pass to Sammy Watkins got the Ravens within one with 12 seconds to go.

Rather than turn to star kicker Justin Tucker for an almost automatic 35-yard extra point, the Ravens (8-4) went for the knockout punch. Baltimore tight end Mark Andrews couldn’t haul in a flip by Jackson. The Steelers (6-5-1) recovered an onside kick to seal it.

Pittsburgh ended a three-game winless streak behind the 39th fourth-quarter comeback engineered by Ben Roethlisberger. The 39-year-old quarterback threw for 236 yards and two second-half touchdowns to Diontae Johnson, the final one a 5-yard catch-and-run with 1:48 to play that gave the Steelers a 20-13 lead.

Jackson took the Ravens 60 yards in eight plays, the last six coming on a tumbling grab by Watkins in the back of the end zone. The offense stayed on the field for the 2-point conversion, opting to do it even after a surprised Pittsburgh called a timeout to reset.

The Steelers brought pressure on Jackson — a constant for three-plus hours — and his hurried throw was too far out in front for Andrews to bring it in.

Patrick Mahomes had 184 yards passing with a touchdown run and an interception for the Chiefs (8-4), who now lead the Chargers by a game and the Broncos and Raiders by two in their race for a sixth straight AFC West championship.

Things went haywire for the Broncos early in the game, when a 20-play drive ended with a failed fourth-down play rather than an easy field goal. And they didn’t get a whole lot better when Bridgewater threw a pair of second-half interceptions, including the one that Sorensen picked off with 9 1/2 minutes left to put the game away.

Bridgewater was held to 257 yards passing for the Broncos (6-6), who have lost 12 in a row to their longtime AFC rival dating to the 2015 season. Javonte Williams started in place of injured running back Melvin Gordon III and had 102 yards rushing along with a touchdown catch late in the fourth quarter.

Thanks to his defense, Chiefs coach Andy Reid improved to 20-3 after a bye.

SEATTLE (AP) — Russell Wilson played his best game since returning from finger surgery throwing for 231 yards and two touchdowns, and the Seahawks made a late goal line stand.

Seattle (4-8) snapped a three-game losing streak but it wasn’t easy as a number of mistakes gave the 49ers a chance for a tying touchdown in the final moments.

Gerald Everett fumbled at the San Francisco 2 with 4:03 remaining and Seattle on the cusp of a clinching score. Jimmy Garoppolo led the 49ers 95 yards to the Seattle 3. But his third-down pass for Trent Sherfield was broken up by Sidney Jones, and his fourth- down pass was deflected at the line of scrimmage by Carlos Dunlap.

It was the second big play by Dunlap, who sacked Garoppolo for a safety early in the third quarter.

Newly signed running back Adrian Peterson moved into a tie with Jim Brown for 10th all-time with 126 career touchdowns, scoring on a 1-yard run in the second quarter for Seattle.

Travis Homer also ran 73 yards for a touchdown on a fake punt on the opening possession of the game for Seattle.

San Francisco (6-6) saw its three-game win streak snapped and was swept by Seattle this season. The 49ers were unable to get their run game going as in recent weeks, with Elijah Mitchell rushing for 66 yards on 22 carries.

George Kittle had nine catches for 181 yards and two touchdowns.

Heinicke threw a 7-yard TD pass to Logan Thomas on the opening drive and a 4-yarder to Antonio Gibson early in the fourth quarter after extending the drive with a key third-down scramble.

But Washington (6-6) then allowed the Raiders (6-6) to score on successive drives to take a 15-14 lead on Daniel Carlson’s 37-yard field goal set up by Nate Hobbs’ interception of Heinicke.

Heinicke responded and drove Washington down the field to set up the kick by Johnson. who was signed earlier this week after Joey Slye went down with an injury.

Coordinator Jack Del Rio’s defense then sealed it to give him the win in his first game against the Raiders since being fired by the team following the 2017 season.

Stafford passed for 295 yards while Sony Michel rushed for 121 yards and a score for the Rams (8-4), who rebounded from a winless November with a solid all-around effort against a struggling opponent. Kupp had his 100th reception of a remarkable season among his eight catches for 129 yards.

Stafford also snapped back into form, playing turnover-free football after giving the ball away six times during the three-game skid that threatened to derail the Rams’ playoff plans. Los Angeles still has never lost four straight in coach Sean McVay’s half-decade in charge.

Rookie Trevor Lawrence passed for 145 yards for the Jaguars (2-10), who have lost four straight.

Jacksonville turned over the ball twice and struggled to get anything going offensively against LA’s star-studded defense, managing just 197 total yards. This defeat means Urban Meyer will lose at least twice as many games in his rookie NFL season as he ever did in any of his 17 seasons as a head coach at the college level.

Herbert was 26 of 35 for 317 yards as Los Angeles (7-5) bounced back nicely after losing 28-13 at Denver last weekend. Mike Williams had five receptions for 110 yards, and Keenan Allen caught two of Herbert’s TD passes.

Cincinnati (7-5) stormed back after falling behind 24-0 in the second quarter. Mixon’s 7-yard TD run made it 24-22 with 7:10 left in the third. But Mixon was stuffed on the 2-point conversion try and Campbell’s fumble return in the fourth helped close it out for Los Angeles.

The Bengals committed four of the game’s seven turnovers. Battling a hand injury for much of the day, Joe Burrow threw two interceptions and lost a fumble.

Minshew was 20 of 25 for 242 yards and two touchdowns to Dallas Goedert. Kenneth Gainwell ran for a score, Jake Elliott kicked four field goals and the Eagles (6-7) improved to 12-0 all-time against the Jets (3-9).

With Hurts out with an ankle injury, Philadelphia bounced back from a 13-7 loss to the Giants last weekend at MetLife Stadium to slice through the Jets’ defense drive after drive. The only possession on which the Eagles didn’t score was their last.

But the win might have come at a cost as running back Miles Sanders left in the fourth quarter with an ankle injury after running for 120 yards on 24 carries. Center Jason Kelce also limped off the field at the two-minute warning.

Things slowed considerably after halftime as the Jets held the ball for only 70 seconds in the third quarter — just three plays for 3 yards. Meanwhile, the Eagles had 24 plays for 81 yards over 13:50 in the period. Philadelphia held the overall edge in time of possession: 35:36 to 24:24.

Isaiah Ford and Mack Hollins had the scoring grabs for Miami (6-7), which has shaken off a 1-7 start. Jaylen Waddle had nine catches for 90 yards for the Dolphins, and rookie Jaelan Phillips had two more sacks — giving him five in his past two games.

Tagovailoa completed 30 of 41 passes for 244 yards and the two scores.

Mike Glennon started at quarterback for the Giants (4-8) in place of Daniel Jones, who was sidelined with a neck injury. Glennon completed 23 of 44 throws for 187 yards, and Saquon Barkley had 55 rushing yards on 11 carries.

Glennon finished the game, and the team said he was diagnosed postgame with a concussion.

New York never found the end zone against a defense that has yielded only 55 points during the five-game winning streak. Graham Gano had three field goals for the Giants.

The Texans turned over the ball twice in the first quarter and quarterback Tyrod Taylor was benched in the third quarter as Houston (2-10) lost for the ninth time in 10 games.

Indianapolis’ Taylor, who leads the NFL in yards rushing, has 16 rushing touchdowns this season, which ties the franchise record set by Lenny Moore in 1964. It’s the 10th straight game when he’s ran for a touchdown, the longest streak in the NFL since LaDainian Tomlinson did it in 18 straight in the 2004 and 2005 seasons.

Carson Wentz threw for 158 yards and a touchdown for the Colts (7-6) before being replaced by Sam Ehlinger with five minutes left in the fourth quarter and the game long decided.

Things went wrong for Houston immediately with Tyrod Taylor throwing an interception on the team’s first play. It was initially ruled an incompletion, but the Colts challenged the call and the review showed that Kenny Moore grabbed it just before falling out of bounds. 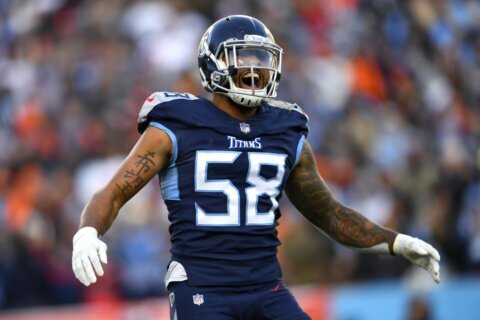 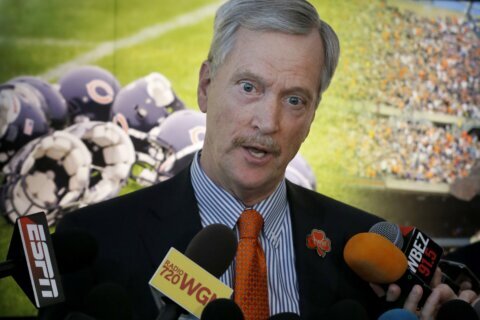