Broncos quarterback Teddy Bridgewater was taken to a hospital for a head injury after he was carted off the field…
Listen now to WTOP News WTOP.com | Alexa | Google Home | WTOP App | 103.5 FM

Broncos quarterback Teddy Bridgewater was taken to a hospital for a head injury after he was carted off the field in the third quarter of Denver’s 15-10 loss to the Cincinnati Bengals on Sunday.

Bridgewater was hurt in a scary collision that also sent Bengals linebacker Joe Bachie from the game with a leg injury.

Bridgewater had movement in his extremities, and coach Vic Fangio said he’d be held overnight for observation but was expected to be OK.

Denver trailed 9-3 with 5:34 left in the third quarter when Bridgewater scrambled to his right on second-and-5 from his 30-yard line. Bachie came up and squatted as he was about to make contact.

They collided and Bridgewater went airborne, landing a yard past the first-down marker, but falling on his face just as he was hit again by defensive tackle B.J. Hill.

Bridgewater lay motionless as Bachie rolled onto his back on his own several yards away. Concerned players from both teams gathered on the field.

While Bachie was helped off with a leg injury and ruled out, the cart came out to take Bridgewater off the field.

Godwin (knee) and Evans (hamstring) left in the second quarter. Fournette (hamstring) exited in the third.

“It hurts more losing all the players we lost,” coach Bruce Arians said. “We lost about seven starters in this game.”

Carolina kicker Zane Gonzalez had to be helped off the field after injuring his quadriceps in warmups, leaving the Panthers without a placekicker Sunday in a 31-14 loss to the Buffalo Bills.

Gonzalez was injured about an hour before kickoff, and the Panthers essentially held tryouts moments later to see if anyone was able to replace him. Receiver Brandon Zylstra, practice squad running back Reggie Bonnafon and linebacker Frankie Luvu practiced field-goal attempts. Zylstra took over for kickoffs, but none did any placekicking.

The Panthers passed up a field-goal attempt and failed to convert fourth-and-9 from Buffalo’s 24 to end their second possession. They went for 2 after both of their touchdowns and converted once.

New York Jets safety Elijah Riley was taken off the field on a backboard after being injured during the third quarter of a 31-24 loss to the Miami Dolphins. Riley injured his neck in a collision with teammate Kyle Phillips.

Riley’s head was stabilized before he was removed from the field on a cart. He appeared to raise his right arm skyward as players from both the Jets and Dolphins went to his side to offer a kind word.

New York Giants wide receiver Sterling Shepard is done for the season after tearing his left Achilles tendon late in a 21-6 loss to the Dallas Cowboys.

Jacksonville Jaguars safety Rayshawn Jenkins broke his right ankle trying to make a tackle on Tremon Smith’s 98-yard kickoff return for a touchdown in a 30-16 loss to the Tennessee Titans. Jenkins was placed in an air cast and carted off the field in the first quarter. His season is likely done.

San Francisco 49ers defensive end Nick Bosa left briefly with a head injury but was cleared to return. He had a strip-sack on the opening drive of the second half in a 31-13 win over the Atlanta Falcons. 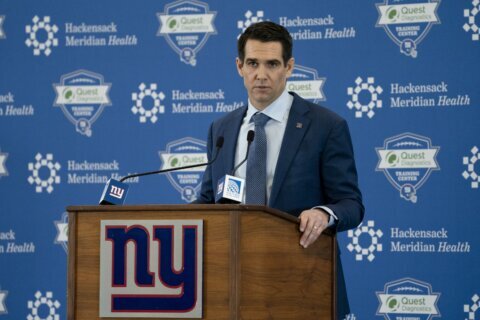 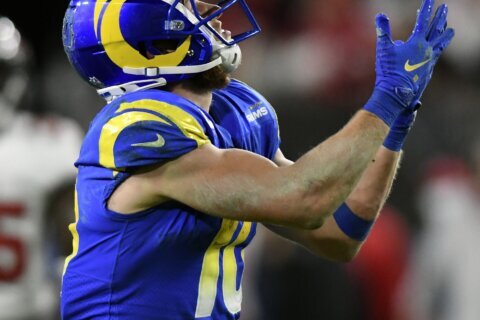