OPENING LINE: Jets by 2 1/2, according to FanDuel SportsBook.

TURNOVER DIFFERENTIAL: Jets minus-15; Texans plus-2.

JETS PLAYER TO WATCH: WR Elijah Moore. The second-round draft pick has been a big-time playmaker lately for New York, no matter who has been at quarterback. Moore has 24 catches for 336 yards and four touchdowns in his last four games.

TEXANS PLAYER TO WATCH: QB Tyrod Taylor threw for 107 yards and ran for a career-best two touchdowns to help Houston to the upset over the Titans last week. He bounced back after tying a career high with three interceptions in his return from a six-game injury absence in the team’s previous game.

KEY MATCHUP: Jets rookie QB Zach Wilson returns after missing the last four games with a sprained ligament in his right knee to face a defense that tied a franchise record with four interceptions last week. Wilson, the No. 2 overall pick in this year’s draft, has thrown nine interceptions with just four touchdowns in six games.

KEY INJURIES: Backup QBs Joe Flacco and Mike White are on the reserve/COVID-19 list, so Josh Johnson will be elevated to the active roster to back up Wilson. … Rookie RB Michael Carter, who leads New York with 430 yards rushing and four TDs on the ground, is out at least two weeks with a high ankle sprain. … Houston DE Jonathan Greenard is questionable to play this week after missing Sunday’s game with a foot injury. … LB Jordan Jenkins injured his knee against the Titans and coach David Culley said he expects him to be out at least two weeks and possibly longer.

STATS AND STUFF: In the four games without Wilson, the Jets have averaged an NFL-leading 346.5 yards passing behind White, Flacco and Johnson. New York also has the most TD passes (10) and first downs on passes (74) in that span. … Moore had eight catches last Sunday against the Dolphins for 141 yards, the most by a Jets rookie since Rob Moore had 175 at New England in 1990. … TE Ryan Griffin has 18 catches, already double the number he had last season in 15 games. … The Jets bounced back from a brutal stretch on defense by giving up just 24 points to Miami after allowing 45 or more in three of their previous four games. LB Quincy Williams had 15 total tackles, the first Jets player with that many since 2009. … S Ashtyn Davis had his first career interception last week and has three straight games with either a forced fumble or INT. … The Jets have just three sacks in their last three games. … K Matt Ammendola is 11 of 16 on field goals, including 0 for 3 on kicks of 50 or more yards. … Houston RB David Johnson had 111 yards rushing and tied a career high with three rushing touchdowns in his only game against the Jets in 2016 while with Arizona. … RB Rex Burkhead has scored a touchdown in three straight games against the Jets. … WR Chris Conley had 103 yards receiving and a touchdown in his last game against the Jets in 2019 with Jacksonville. … CB Desmond King had two interceptions last week. … LB Kamu Grugier-Hill led the team with a career-high 12 tackles and had an interception last week. … LB Zach Cunningham had 11 tackles and forced a fumble against Tennessee. … LB Jacob Martin has had a sack and forced a fumble in two consecutive games.

FANTASY TIP: Houston WR Brandin Cooks leads the team with 659 yards receiving and has five catches in four of his last five games. He had 79 yards and a touchdown in his last game against the Jets in 2017 with New England. 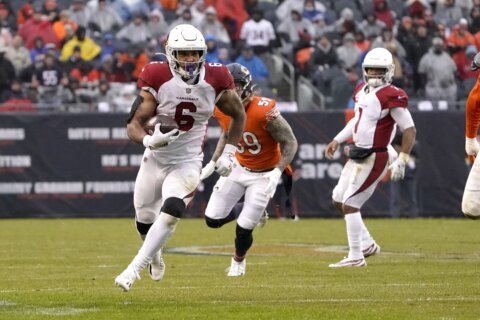 Patriots throw fewest passes in an NFL game since 1974