Bears coach Matt Nagy denies report he will be fired

LAKE FOREST, Ill. (AP) — Who coaches the Chicago Bears after Thursday seems to be the bigger topic now than who their starting quarterback will be this week.

Bears coach Matt Nagy said Tuesday Andy Dalton will start against the Detroit Lions for injured Justin Fields, then spent half of his press conference dealing with a report saying he has been told he will no longer coach the Bears after Thursday’s game.

“That is not accurate,” Nagy said of the report, which appeared on Patch.com.

The Bears have lost five straight and for three straight years have had losing streaks of four games or more. So Nagy’s job status going forward has been a hot debate throughout Chicago. Chants of “Fire Nagy,” were heard at times in Soldier Field during Sunday’s 16-13 loss to Baltimore — and even at the United Center during a Chicago Bulls game.

The report about the firing was by Pulitzer Prize winner Mark Konkol, a former news reporter for the Chicago Sun-Times. It did not indicate a source.

Nagy said he normally talks on a regular basis with team general manager Ryan Pace, President Ted Phillips and board chairman George McCaskey, but not this week as there were no meetings scheduled.

“We have constant communication,” Nagy said. “I always think it’s good and healthy and so we stayed on course. With the bye week and then with the short turnaround and with game prep, we have not (talked).”

The Bears have never fired a coach during midseason.

Bears safety Tashaun Gipson said support for Nagy remains high within the team even during the losing streak and in the midst of a 3-7 season.

“I know what a losing locker room is like, and this is not that,” Gipson said. “I know our record indicates that a lot of guys may be willing to check out, but that’s not the energy, that’s not the atmosphere that I sense here.”

Dalton went through several years when such rumors haunted the Cincinnati Bengals about former coach Marvin Lewis, and often they proved untrue.

“I think there are rumors all over the place about a lot of different things at different times,” he said. “And as a locker room, you don’t worry about that. There are so many other things you have to worry about.

The focus for Dalton is making his first start since Week 2 against his old team, the Bengals.

“I always felt like I was prepared and ready to go this past week when I got the chance to go in there,” Dalton said “Obviously there were some good things that happened and some things … I wish I would have had back.”

Dalton replaced Fields after the starter suffered an injury to his ribs in the third quarter, and immediately threw a 60-yard touchdown pass to Darnell Mooney. Later he converted a fourth-and-11 pass for a 49-yard TD to Marquise Goodwin for a 13-9 Bears lead late in the fourth quarter. The defense gave up a winning final drive for the second straight game.

Dalton could have the benefit of wide receiver Allen Robinson in the lineup Thursday after he missed the last game with a hamstring injury, although Robinson did not practice Monday or Tuesday.

“I’m getting better,” Robinson said. “You know, there’s been constant improvement since I got hurt against Pittsburgh. Now I’m continuing to push through and trying to do what I need to do to make myself available. That’s always my No. 1 priority is being out on the grass.”

Like Gipson, Robinson has been with plenty of losing teams in the past and sees this one as united behind Nagy, if not trying to win one for him.

“You have to respect him as a person,” Robinson said. “Besides football and putting everything aside, there’s a respect factor there.

“When the term ‘playing for your coach’s job’ (comes up), it’s just respecting your coach and respecting what he has going on, and for guys to continue to be pros.”

NOTES: The Bears placed slot cornerback Duke Shelley on injured reserve with a hamstring injury and elevated defensive lineman Margus Hunt from the practice squad to the 53-man roster. … Safety Eddie Jackson practiced on a limited basis for the second straight day and the Bears are hoping he can return from a hamstring injury suffered Oct. 31 against San Francisco. 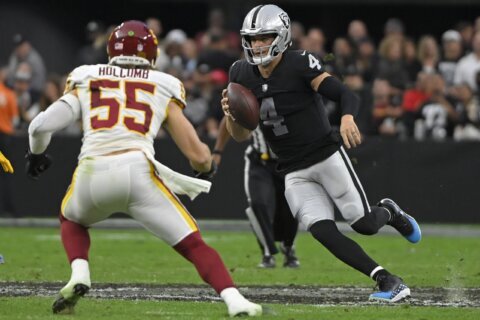