The Green Bay Packers are hoping 2020 Pro Bowl cornerback Jaire Alexander’s injured shoulder will heal on its own rather than needing season-ending surgery.

“It’s one of those things we’re going to let heal and see where it’s at down the line before making that determination (on surgery),” coach Matt LaFleur said on Friday. “But we’re hopeful that it’ll heal the right way and he’ll be back with us in a matter of weeks.”

Alexander was injured during the third quarter of a 27-17 victory over the Pittsburgh Steelers. LaFleur ruled out Alexander and center Josh Myers (finger) for Sunday’s game at Cincinnati.

“It’s obviously big shoes to fill,” receiver Davante Adams said of losing Alexander. “Jaire’s all over the place. He makes a lot of plays. It’s not often a play is made on him.”

Alexander, who missed only one game over the previous two seasons, was a second-team selection in the 2020 All-Pro voting. He had one interception during the 2020 regular season and two more in the NFC championship game.

Voted one of two permanent defensive captains for this season, he had another interception in a Week 3 victory at San Francisco.

“He prepares the right way, he’s a pro,” LaFleur said. “Not to mention, he’s pretty damn good at corner, as well. I just think he’s the complete package.”

Without Alexander, the Packers are expected to start Kevin King and rookie first-round pick Eric Stokes at cornerback with Chandon Sullivan in the slot. King missed the last two games with a concussion but was a full participant at Friday’s practice.

Friday also marked former Dallas Cowboys linebacker Jaylon Smith’s first practice with the Packers. Dallas, with a glut of linebackers, released him earlier in the week. Smith joined the Packers on Thursday.

Green Bay, a championship contender with Aaron Rodgers at quarterback, was an easy choice for Smith.

“I wanted to be in Green Bay, simple as that,” he said.

LaFleur was Notre Dame’s quarterbacks coach in 2014 when Smith was playing for the Fighting Irish.

“We developed a strong relationship,” Smith said. “His history in the National Football League is what attracted me to him. I asked a lot of questions, I got to learn a lot from him and the relationship just continued to grow.”

The Cowboys pivoted away from Smith this offseason, signing safety-turned-linebacker Keanu Neal in free agency and adding Micah Parsons with the 12th pick of the draft. The Cowboys let him go in what Smith called a “business” decision.

Smith called his game “elite” and is eager to prove it to his new team.

“I believe every player has their doubters but, for me, everything I’ve done up to this point has been legit and I know what kind of player I am,” he said. “The guys know what kind of player I am. The coaches know. I’m a team guy, and I’m a guy that’s going to add value. So, honestly, I’m just head down, working, and when I get an opportunity, producing is the name of the game, so I’m locked in and I’m ready to add some value.”

NOTES: Rookie C Josh Myers is out for Sunday. He’s battled a finger injury the past few weeks but was shut down by the training staff. LaFleur didn’t think it was a long-term issue. … Pro Bowl offensive lineman Elgton Jenkins, who missed the last two games with an ankle injury, is questionable. He could start at left tackle, left guard or center. … With outside linebackers Za’Darius Smith (back) and Chauncey Rivers (knee) on injured reserve, La’Darius Hamilton will make his NFL debut. An undrafted free agent in 2020, he spent his rookie season on the Dallas practice squad with Jaylon Smith as a teammate. “Definitely a childhood dream to be suited up for the first game,” Hamilton said. “It’s a lot of excitement going into it, but just have to keep preparing just like I’m going to be playing, so I’m ready. If they call my number, I’m going to be ready to play.” 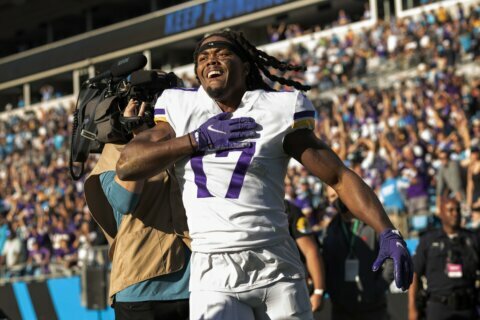 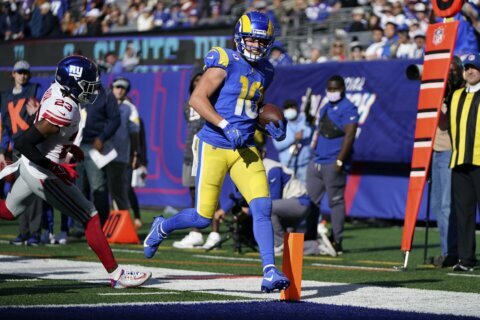