ALLEN PARK, Mich. (AP) — The Detroit Lions have one of the youngest defenses in the NFL, and they’ll have…
Listen now to WTOP News WTOP.com | Alexa | Google Home | WTOP App | 103.5 FM

ALLEN PARK, Mich. (AP) — The Detroit Lions have one of the youngest defenses in the NFL, and they’ll have their hands full in Week 1 against a San Francisco offense that promises to be unpredictable.

One of the biggest challenges facing first-time head coach Dan Campbell is preparing for San Francisco’s possible quarterback rotation Sunday. Jimmy Garoppolo is expected to start but rookie Trey Lance could have his own package of plays if his broken finger recovers in time. Campbell is leaving all options on the table.

“I think you’ve got to prepare for both,” Campbell said Monday. “You have to assume that they may try to mix (Lance) in there and use him a little bit. We’ll make sure that we’ve taken care of some of that.”

Detroit will try to counter with youth. The Lions are especially young at cornerback, where third-year pro Amani Oruwariye is the oldest of the group at 25. He’s projected to start opposite Jeff Okudah, the NFLs third overall pick in last year’s draft. Okudah struggled during his rookie season, but he has improved in camp and is entering the season with a renewed confidence thanks to new leadership in the coaching staff.

“Just being around the whole energy in Detroit has been really great for me,” Okudah said. “I’m excited for Year 2, whatever it has to offer.”

A significant portion of that energy has come from Lions defensive backs coach Aubrey Pleasant. After serving as cornerbacks coach for the Rams for the past four years, Pleasant, a Flint, Michigan native, has returned home to Detroit and gained the trust of general manager Brad Holmes, who worked alongside him in Los Angeles.

“I’ve always said that (Pleasant) is one of, if not the, best DB coaches that I’ve been around,” Holmes said. “He’s extremely impressive in the way that he teaches it in a very digestible manner that allows players to learn quickly and learn fast.”

San Francisco has an impressive coaching staff, none more recognizable than head coach Kyle Shanahan. One of the brightest offensive minds in the league, Shanahan’s units test the defense’s discipline with pre-snap motion, play-action fakes and counter plays.

“They’re going to give you some eye candy,” Campbell said. “They’ll do the fake sweeps, the fake jet sweep motion, try to pull your eyes or see if you’re undisciplined, are your eyes going to follow him instead of following your run key or your description is in the pass? I think they do that and then they know how to cut the defense.”

Detroit has promised to be more aggressive on defense after finishing dead last in the NFL and allowing a franchise-high 32.4 points per game in 2020. A revamped defensive front will help, as the Lions are expected to hand big roles to rookie defensive tackles Alim McNeill and Levi Onwuzurike. The Lions also return veteran Romeo Okwara, who is coming off a 10-sack season. He believes the key to being aggressive, while maintaining discipline against a team like the 49ers, is to simply trust the tape.

The Latest: Giants lose three starters in half vs. Falcons 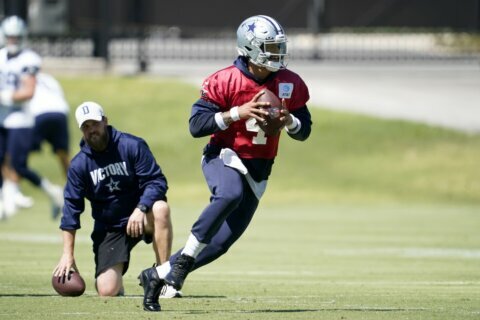