DENVER (AP) — Vic Fangio has a rejoinder ready for anyone downplaying Denver’s first 3-0 start in five years just because the Broncos’ opponents are a combined 0-9.

Just like there’s no denying the Broncos are tied with Las Vegas atop the topsy-turvy AFC West, two games ahead of the two-time defending AFC champion Kansas City Chiefs.

The Jets (0-3) became the third NFL team to lose a dozen consecutive games in September, joining the 1994-97 Saints and the 2007-10 Rams, who hold the record with 13 consecutive losses in the month.

“It’s frustrating,” Wilson said. “We’re all learning. We’re trying to get better every single week. It may be hard for people to see that, but we’re learning a lot from those games. People are gonna hate. It is what it is.”

The Broncos know just how Wilson’s feeling. They won just 32 of 80 games during the past five seasons, churning through coaches and quarterbacks at a dizzying pace.

Now, they’ve throttled the Giants, Jaguars and Jets by a combined 76-26.

Von Miller picked up his fourth sack and middle linebacker Alexander Johnson had a pair of sacks, two tackles for loss, two quarterback hits and a pass breakup for Denver, which also got sacks from Shelby Harris and Malik Reed.

A week after throwing four interceptions against the Patriots, Wilson was picked off by Justin Simmons in the waning minutes and also turned it over on downs at the Denver 25-yard line and at his 41. With 30 seconds left, rookie Cacen Sterns picked him off to seal the shutout.

Four of the sacks came in the first half when the Broncos built a 17-0 lead and limited the Jets to just 55 yards, 13 of which came on a run by Ty Johnson just before he and his teammates trudged through the tunnel.

“I think we’ve got a good team,” said Fangio, who brought an 0-7 September mark into the season. “We’ve been pretty damn solid for three weeks both offensively and defensively. Today, we had to work for everything offensively; they’re a good defense. They’ve got a lot of good players over there and made it hard for us. (But) we were able to get enough drives going, make enough plays to put some points on the board.”

And keep the Jets off the board on a sun-splashed day in front of the first capacity crowd at Empower Field at Mile High since 2019.

Three of the Broncos’ past four shutouts have come against the Jets.

With another opponent selling out to stop Denver’s ground game, Teddy Bridgewater was efficient once again. He completed 76% of his passes — 19 of 25 — for 235 yards with no touchdowns and no interceptions in his home debut. He connected with Tim Patrick five times for 98 yards.

The Broncos got 1-yard TD runs from Melvin Gordon III and rookie Javonte Williams, but Williams also fumbled at the 1 and had a mix-up on a handoff from Bridgewater on another play from the Jets 1.

“We should have had two touchdowns each,” Gordon said. “Today was not good enough, but it was good enough to get the win.”

The Jets had no such silver lining.

Don’t the Broncos know that.

Fangio had no update postgame on guards Dalton Risner (foot) and Graham Glasgow (left knee), who left in the second half, or speedy wide receiver K.J. Hamler (left knee).

The Broncos came into the game down four starters already.

Risner was whistled for taunting the Jets after Gordon bulled his way into the end zone, and Jets cornerback Justin Hardee was flagged for taunting when he jawed at returner Diontae Spencer.

The NFL has emphasized taunting this season and had thrown 11 such flags coming into Sunday.

“Dalton, he swore to me he didn’t do anything,” Fangio said. “But you know I’ve harped on this with the players since training camp started that they were going to be calling this super closely, and they have been.”

Jets: WR Elijah Moore was evaluated for a head injury and TE Tyler Kroft (chest) went out in the second half.

Broncos: ILB Jonas Griffith (hamstring) was hurt in the second half. 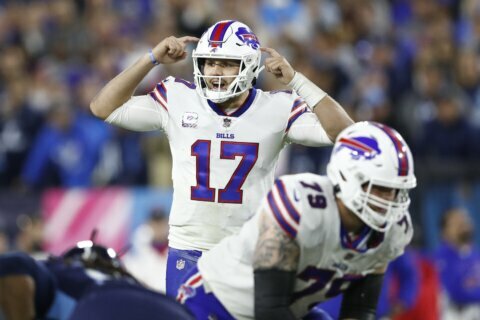 It’s deja-oof all over again: Bills enter bye with a thud 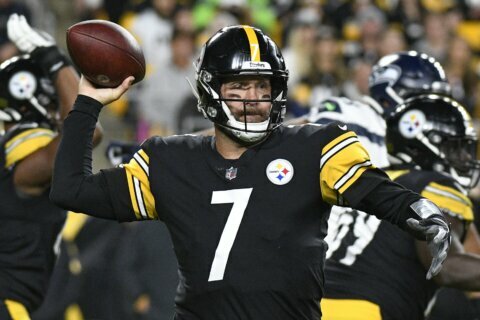 Steelers believe momentum is building after a rocky start 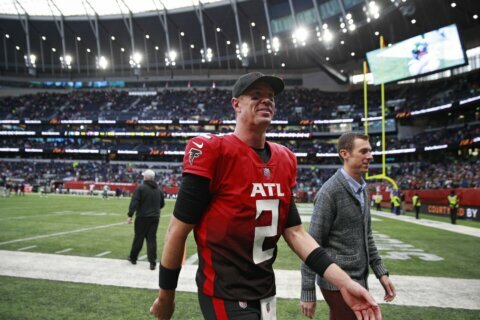