EAST RUTHERFORD, N.J. (AP) — The New York Giants have signed three of their six selections in the draft.

The Giants announced deals with outside linebacker Azeez Ojulari of Georgia, running back Gary Brightwell of Arizona and cornerback Rodarius Williams of Oklahoma State on Thursday, a day before a rookie minicamp.

Ojulari was taken in the second round, while Brightwell and Williams were selected in the sixth.

The minicamp is expected to have 22 players because of COVID-19 protocols. The on-field work will emphasize individual drills.

Heggie played in 41 games with 31 starts — 15 at left guard, 12 at center and four at right guard. He was a center for the Gators last season.

Burton played at Baylor as a graduate transfer last season and started eight games at right guard. He previously spent four years at UCLA, where he played in 29 games, including starts at right tackle in 23 of 24 games in 2018 and ’19.

Johnson played in 50 games with 47 starts at Georgia Southern. He started all 38 games the previous three seasons and had 150 tackles, including 36 for loss and 16 1/2 sacks. 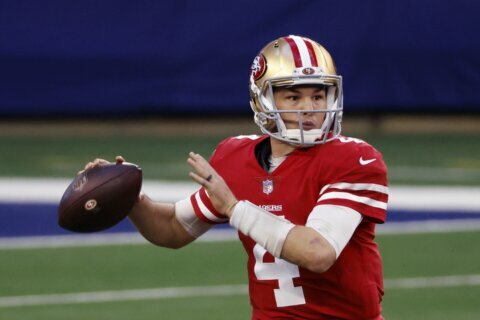