Lynzie Smith, a 32-year-old mother of two with one on the way, breastfed both her newborns for more than six…
Listen now to WTOP News WTOP.com | Alexa | Google Home | WTOP App | 103.5 FM

Lynzie Smith, a 32-year-old mother of two with one on the way, breastfed both her newborns for more than six months and stuck to a low-fat diet high in fruits and vegetables during all of her pregnancies. Now she’s passing on her healthy eating habits to her 5-year-old son and 3-year-old daughter. She and her husband regularly serve their children smoothies made with ingredients like apple, mango and spinach, and then they get creative to persuade the children to drink the healthy shake.

Unbeknownst to Smith, she’s also strengthening the vast networks of bacteria that live in her children’s digestive tracts. The human body contains trillions of microbes that play a key role in moderating important functions like immunity, metabolism and brain function. In fact, an improper balance of good and bad bacteria in the gut has been tied to an increased risk of several disorders, including obesity, asthma and allergies.

Recent advances in gene sequencing have allowed researchers to unravel the genetic codes of many of the bacteria in the gut and to link those microbes with the roles they play in maintaining good health. As microbiome science advances, scientists are learning more and more about how everyone can adopt habits that will boost levels of beneficial bacteria in the body while keeping the bad bugs at bay.

Smith’s obstetrician and gynecologist, J. Daniel Woodall of Spectrum Health Pennock in Michigan, hasn’t mentioned the term “microbiome” to her. But much of his advice has centered around establishing a diet and lifestyle that contribute to healthy gut bacteria, both for her and her children. “The infant microbiome mirrors that of the mother for three to six months,” he says. “We know a healthy diet leads to healthy gut flora, and that breast milk has good bacteria.”

Indeed, research shows that the road to a healthy microbiome starts before birth. Several studies have found that a mother’s fat intake can influence the establishment of good bacteria in her baby’s microbiome, for example. Researchers at the Baylor College of Medicine and Texas Children’s Hospital in Houston studied 162 pregnant women and their newborns and found a tight correlation between the amount of fat in their diet during pregnancy and the depletion of some strains of healthy bacteria in the babies’ guts. Specifically, a diet consisting of 35% or more of fat led to a stark reduction in bacteroides, bacteria that may influence immune system development and inflammation. The impact of Mom’s diet on the microbiome of her baby can persist as long as six weeks after birth.

There hasn’t been enough research in people to determine exactly what the consequences of that might be, but in nonhuman primates, that shift in the microbiome causes newborns to be vulnerable to later obesity, insulin resistance and metabolic syndrome, says the study’s lead author, Kjersti Aagaard, a professor at Baylor College of Medicine and Texas Children’s. “Just how much of that is reversible we don’t know,” she adds.

After birth, the evidence of breastfeeding’s benefits to the microbiome continues to build. In January, Harvard researchers published a study in the journal Nature showing that mouse mothers pass on protective antibodies to their offspring via both the placenta and milk. That protects them from disease-causing bacteria like E. coli.

Although further studies need to be done to confirm that the same phenomenon occurs in people, it could explain why mother’s milk is so beneficial, says Dennis Kasper, lead author and professor of medicine at Harvard Medical School. “It’s long been thought that many antibodies against infections have to come from the mother’s blood, passed across the placenta. But we saw clear protection against infection from just breast milk.”

There’s growing suspicion that use of antibiotics early in life may be one explanation for the prevalence of childhood obesity — that wiping out the good bugs along with the bad may change the microbiome in a way that predisposes children to the condition, as well as to others. In a 2019 study, a research team from the Uniformed Services University in Bethesda, Maryland, studied the records of infants born between 2006 and 2013 and found a high association between antibiotics use during the first two years of life and later development of obesity.

A subsequent study from the team found that children prescribed antibiotics in their first six months were more apt to develop allergies or asthma later in life than were those who didn’t receive the drugs. Those who took more than one type of antibiotic faced a higher risk. The overall increase in risk ranged from 8% for food allergies to 47% for asthma.

That’s not to say parents should avoid giving antibiotics to their children to treat confirmed bacterial diseases, says Cade Nylund, associate professor of pediatrics at the Uniformed Services University and co-author of both studies. But they should make sure the drugs are truly needed.

“The most common indication for antibiotics prescriptions in infants is upper respiratory infections, primarily ear infections,” Nylund says. “However, a lot of times, parents come in with an infant who has a fever but no clear indication of an ear infection, and as a precaution, antibiotics are given. Maybe we shouldn’t be doing that.”

When babies are born prematurely, they almost always receive antibiotics to protect against potentially deadly infections. Now some physicians are rethinking that practice, including those who treat preemies at St. Louis Children’s Hospital. They were disturbed by a 2019 study from Washington University School of Medicine in St. Louis suggesting that antibiotics cause long-lasting damage to the gut microbiome.

The researchers found that 18 months after babies were discharged from the neonatal intensive care unit, those who received antibiotics had more bacteria that can cause serious diseases than did healthy full-term babies. What’s worse, those bugs had grown resistant to antibiotics. That’s a problem for the developing microbiome, says lead author Gautam Dantas, professor of pathology and immunology and molecular microbiology at Washington University School of Medicine.

“The microbiome and all of its important action is happening at exactly the same time in these [premature infants] as you’re bombarding them with the exact chemicals that can do the most damage,” Dantas says. That not only kills off good bugs that the baby might need, but it creates drug-resistant bad bacteria that can pass on their genes, potentially setting the child up for a future illness that’s hard to treat. “And that could happen 40 years later,” Dantas says.

There is one major caveat inherent in many of the studies drawing a link between antibiotics and negative changes to the microbiome, however. It could be that children who develop diseases that require antibiotic treatments early in life are also more susceptible to infections, allergies and obesity, and it would be challenging to design a study to definitively answer the question of which came first.

That said, all of the mounting evidence argues for considering steps parents can take to better arm their kids. Studies have shown that diets high in animal protein and fat, as well as highly processed carbohydrates like white bread and pastries, can deplete beneficial bugs such as Bifidobacterium, which is essential for healthy digestion and preventing infections. Upping your children’s consumption of peas and other vegetables and fruits, downplaying sugary breakfast cereals and candy, as well as feeding them protein from sources like milk and yogurt, can boost levels of Bifidobacterium.

Has your kid been begging you to get a dog? It might be a good idea. Early exposure to pets can increase the diversity of gut microbes and boost the population of bacteria that protect against obesity and allergies, according to data gathered from the Canadian Healthy Infant Longitudinal Development, or CHILD, project, a long-term study of pregnancy and early childhood.

[Read: Adopting a New Pet During the Pandemic.]

Some women who undergo cesarean sections immediately swab their children’s eyes and skin with vaginal fluid — a practice called “vaginal seeding” — hoping to pass along beneficial bacteria that their infants are unable to acquire because they’re not passing through the birth canal. But there’s limited evidence to back up that claim, Woodall warns, and the practice could raise the risk of passing on bacterial diseases like streptococcus to infants. The American College of Obstetricians and Gynecologists advised against vaginal seeding in 2017.

For now, commonsense habits like following a healthful Mediterranean diet and breastfeeding offer the best path to a healthy microbiome in your children, Woodall says. This science is “definitely one piece of the pie in terms of overall infant health.” Expect to be hearing more about it, he says. 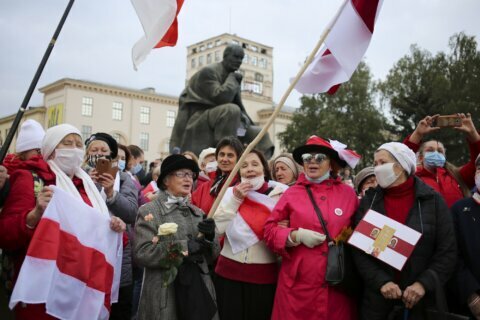