Members of the Street Sense Filmmakers Coop are taught everything from writing screenplays to directing films. The only difference is, these creatives are homeless.
Listen now to WTOP News WTOP.com | Alexa | Google Home | WTOP App | 103.5 FM
(1/2) 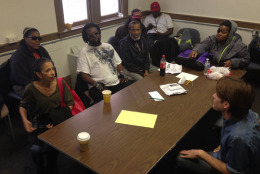 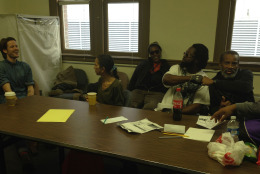 WASHINGTON — A group of directors, cinematographers, producers and editors sit around a table in Northwest D.C. brainstorming about an upcoming promotional trip to New York.

They hope to meet David Letterman, or at the very least get the attention of NBC recruiters who hold keys to the magical kingdom of prime time television.

Most of the men and women gathered have never been to the Big Apple. In fact, all of them are either homeless or recently housed. They are part of a film cooperative started by Street Sense, an independent newspaper floating around D.C. and other major cities created from start to finish by homeless people.

The Street Sense Filmmakers Coop meets once a week to talk about upcoming projects and learn tricks of the trade. Like any film student, coop members are taught everything from writing screenplays to directing films.

Many of the projects focus around the experience of being homeless, but not all. One is a variety show complete with various acts and entertainment. Another film, directed by a quiet woman named Sasha Williams, takes the form of a reality show pilot.

Williams doubles as the cinematographer in another project filmed by the gregarious Morgan Anthony Jones, whose alter ego — Morgan Valentino — has been crowned “the sexiest bum alive”:

Though no longer homeless, Jones still remembers what it was like to live on the streets. His movie is a kind of “Austin Powers” parody that follows Valentino on his journey to becoming an intern in New York City.

Jones says he created his alter ego after noticing how differently the world treated a well-dressed man versus a homeless urchin.

“I did it because people don’t pay much attention to me until I shaved and changed my hairstyle and I cleaned up and I put on a tie,” he says.

“People said, ‘You look good. You look handsome. You look dashing.’ I felt good about myself as I started changing, and people started looking at me, started paying attention to me.”

Jones lives in Jeremiah House, a single room occupancy that offers low rent, case management and financial planning. He volunteers at the Smithsonian and is studying hospitality and management at the University of the District of Columbia.

It’s there that Jones saw a flyer inviting students to apply to internships at NBC’s New York headquarters. With no film or TV background, the opportunity seemed completely outside of his reach until Jones met Bryan Bello, an American University graduate student volunteering at Street Sense.

By day, Bello works as an editorial assistant at a small science magazine in Dupont Circle. But as an emerging filmmaker, Bello is interested in documented the homeless experience in a way that “would leave a lasting impact” on the audience.

“There’s been a ton of films on homelessness and, like a lot of film, you see it, you remember it for a few weeks and then it just disappears into the void,” he says.

So instead of interviewing homeless people on camera, Bello started working with them.

Bello was introduced to Street Sense by a homeless man he befriended while working on his documentary. He joined the filmmakers coop as a teacher and soon found that he was incorporating their stories into his own.

“The complex stories and the need to tell them — that’s what I’ve discovered here,” Bello says.

The film coop launched in April and is already wrapping up work on seven projects, which the group hopes to screen locally sometime in the spring.

Bello admits that producing so many films in less than a year was perhaps “overly ambitious,” but he also marvels at the quality of the work he’s seen.

“It’s been nothing short of amazing,” Bello says, adding “we started out as strangers, but now I’m working with my friends.”

Before meeting Bello, Jones had never picked up a camera. Now, he is starring, directing, producing and writing his very first film. He credits Bello with teaching him everything from holding a camera to getting along with others, and laments that sometimes creative differences simply cannot be overcome.

In fact, Jones “fired” his original cinematographer on “Morgan Valentino” because she would not follow his instructions.

“I would say ‘Do this’ and she would say ‘No, I’m going to do it like this,’ so I had to fire her,” he says. “Sometimes you just can’t work with people. It broke my heart, but I had to let her go.”

Bello smiles as Jones tells his story, nodding along and laughing when Jones starts to gush about how much he’s learned from the young filmmaker. But for Bello, the experience of working with Jones and the rest of Street Sense has been humbling. In fact, Bello plans to start working there full time.

“You can’t just understand someone from their environmental reality [of being homeless],” he says. “Unfortunately that’s what we do when we see someone [living] outside, but they are a universe of different things, just like anyone else.”

Watch the video below to learn more about the Street Sense Filmmakers Coop: