Bridges, ‘junk’ and photos: A different kind of street art 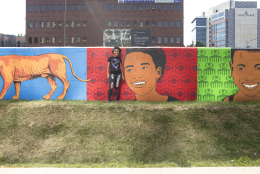 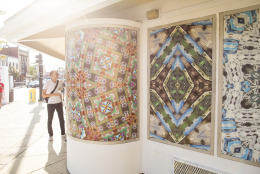 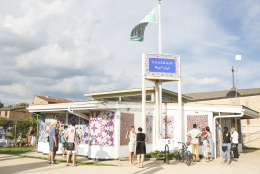 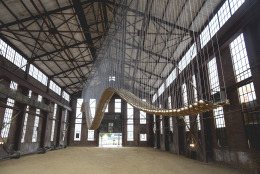 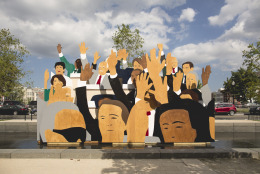 WASHINGTON — Perhaps you’ve seen an image on the corner of 14th and U streets in Northwest D.C. of a black man wearing a cap and gown. He is looking out from the photo, daring his peers to be “men of legacy.”

Or perhaps you’ve noticed the kaleidoscopic building on 13th and H in Northeast that combines American icons with their Iranian counterparts.

And then there is the infamous “junk” installation in Anacostia that angered Councilmember Marion Barry and some of his constituents in Ward 8.

Those pieces and many more are scattered throughout the city as part of the biannual 5×5 Project, which brings 25 contemporary artworks to the streets, buildings and even sidewalks of D.C.

“We’re bringing the top contemporary art out into the neighborhoods where D.C. residents actually live,” says 5×5 Project spokeswoman Sarah Massey. “Someone can be walking down U Street on their way to the Metro and look up and see artwork available where we live, where we shop, where we spend our time.”

5×5 started two years ago, at the behest of the D.C. Commission on the Arts and Humanities. The idea was to spread art into every ward in the District as a kind of democratization.

“Part of the idea is that wherever our residents, they should be able to access art and have a dialogue about it,” Massey says. “We’re hoping this starts a conversation.”

Glenn Kaino’s “Bridge,” in Southeast D.C., is being heralded as “one of most powerful pieces of art in recent history.”

The hanging bridge is made of dozens of golden casts of Olympian Tommie Smith, who raised his fist in solidarity with the Civil Rights movement after winning the 200-meter dash in 1968:

Following unrest in Ferguson, Missouri — where an unarmed black teen was killed by a police officer — “Bridge” can be seen as a conduit for change.

“To me in the capital, in terms of the importance of raising this dialogue, in a region of policymakers, is something that’s very vital, especially now in context with what’s going on not only in the world, but here in the country,” Kaino tells Forbes.

The sentiment is echoed in “Ceremonies of Black Men,” which features five photographs by different artists scattered throughout the city. Each image shows black males in various stages of life, often accompanied by an inspirational quote. The one on 14th and U, for instance, reads “Holla at me if we can be men of legacy, if we can be men of boundless tomorrow.”

Larry Cook’s “Regalia II” is up at The Reeves Center on 14th and U St NW! Turn Up! #CoDm #5x5dc #dcarts #publicart (repost from @hamiltoniangallerydc)

When that installation was added to 5×5 more than a year ago, the events in Ferguson had not yet happened. But now that the dialogue has started, “Ceremonies of Black Men” feels more relevant than ever, a sign that art always has a place in daily life, Massey says.

“It’s a conversation we want to be having, and we think that everybody in the District, and, really everybody in the country, should be having about how we look on people in our society and how we treat them,” she says.

This exhibit is about “how we grow as a society.”

5×5 runs through December in various parts of the city. The next round of events will be held at the National Museum of Women in the Arts. Click here for a full schedule.

And to learn more about 5X5 Project, watch the video below: