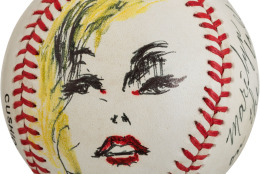 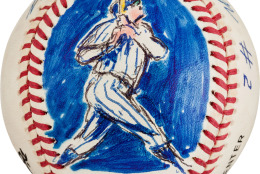 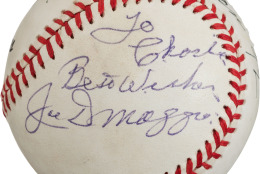 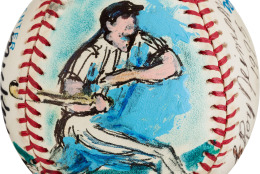 NEW YORK (AP) — Artist LeRoy Neiman had never tried drawing on a baseball until he sketched a player on one as a favor to a marketing executive. Over the next three decades, Neiman drew on 129 balls for his friend, capturing some of baseballs’ greatest players in action.

On May 16, Charlie McCabe’s entire Neiman art-baseball collection will be offered in a Heritage Auctions online sale.

Among the highlights is an autographed 1995 baseball of Mickey Mantle swinging a bat. It’s signed: “Mickey — There’ll never be another.”

Another ball from 1995, of Babe Ruth holding a bat, is signed “To Charley, another collaboration, LeRoy Neiman ’95.”

Neiman, who was celebrated for evoking the kinetic energy of the world’s biggest sporting and leisure events and for his instant renditions of what he observed, died in 2012. He was the official painter of five Olympiads and a contributing artist at Playboy magazine for many years.

McCabe’s friendship with Neiman evolved during his time as marketing and communications officer at Manufacturers Hanover, later JP Morgan Bank. The bank was a major sponsor of sporting teams including the Yankees, Giants, Jets and Knicks. When a beer sponsor that had awarded the Mets Player of the Year each year with an original Neiman drawing pulled out, Manufacturers Hanover stepped in.

“The first ball LeRoy made would have been 1978, when we went to Mets spring training,” McCabe said. “I gave him a ball and asked him to draw on it.”

“He got a real kick out of painting the baseballs because he hadn’t ever drawn anything on a ball before,” he added. Over the years, McCabe said he asked the artist to sketch other celebrities, too.

A special piece is a 1992 ball of Marilyn Monroe that is signed “To Charlie, Best Wishes, Joe DiMaggio.” What makes it rare is that DiMaggio, who was briefly married to the actress, famously refused to sign anything related to her, the auction house said. It is estimated to bring $6,000.

Neiman used colored magic markers for many of the balls, drawing some at games, others in the car as McCabe ferried him to and from stadiums. Some he later embellished at his studio.

“LeRoy is the most renowned sports artist of our generation,” said Steve Costello, executive vice president of Steiner Sports, a leading seller and authenticator of sports memorabilia.

The one-of-a-kind balls that feature hall of famers are especially valuable, said Costello, who owns three balls Neiman drew for him — of Mike Piazza, Cal Ripken and Mark McGwire. But he is not selling.

McCabe said he kept his collection in the cellar of his New Rochelle home and never exhibited it. He planned to donate part of the sale proceeds to charity, saying Neiman helped with the many charities McCabe supported.

“LeRoy was just an amazing person, a great, great guy,” said Costello. “He donated millions. He was always about living life and giving back.”