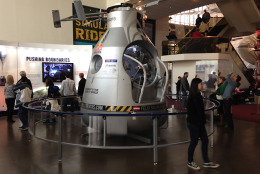 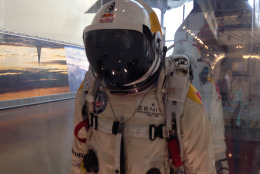 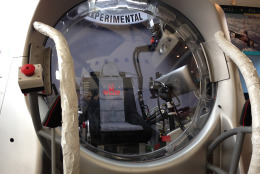 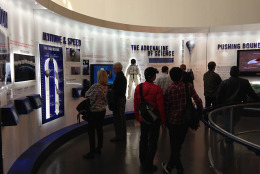 WASHINGTON — Imagine falling to earth from 24 miles up.

A skydiver took that incredible plunge in October 2012, and items related to the jump have landed at the National Air and Space Museum in D.C. for a limited time.

Felix Baumgartner broke four world records when a helium-filled balloon carried him to the stratosphere in a capsule and he jumped out.

“He was moving at more than 800 miles an hour, and, of course, when he did that, you can really only do that at the very top of the atmosphere where there’s not much air, not much air resistance.”

The capsule’s on display at the museum through May 26 as part of the temporary exhibit “Red Bull Stratos: Mission to the Edge of Space.”

Also included in the exhibit are a pressure suit Baumgartner wore during a test jump, along with dramatic photos and video of the mission.

The capsule, along with Baumgartner’s parachute and the pressure suit worn on his final jump, will eventually be placed on permanent view at the museum’s Udvar-Hazy Center, in Chantilly.

Crouch says the jump wasn’t just a stunt to get into the history books.

There were technical advances inside the capsule and in the form of Baumgartner’s pressure suits.

“Most pressure suits are designed for a pilot who’s sitting down. This one is designed to give him more mobility, more flexibility – which somebody who’s parachuting from that high has to have to keep himself stable,” Crouch says.

Finally, and possibly most importantly, the mission was a crucial step toward developing a survival plan in case there are problems with commercial sub-orbital flights of the future.

“A lot of thought’s been given to how you get them up there, but not very much to what happens in case there’s an emergency.”

Check out more of the exhibit here.