A stretch of northbound I-270 in Germantown has a 25-foot wall separating it from area homes. But it didn\'t protect several homeowners from rocks when snowblowers came through on Friday morning.
Listen now to WTOP News WTOP.com | Alexa | Google Home | WTOP App | 103.5 FM
(1/4) 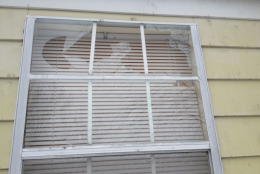 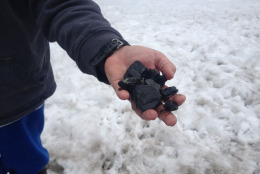 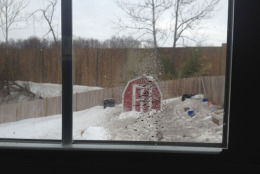 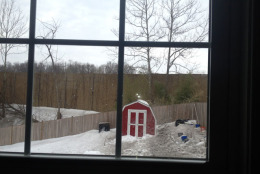 WASHINGTON — A stretch of northbound Interstate-270 in Germantown, Md. has a 25- foot wall separating it from area homes. But it didn’t protect several homeowners from rocks when snowblowers came through on Friday morning.

Three windows were broken in Jackie Amaya’s home by rocks that were thrown by snowblowers along the interstate. She was at work when it happened. She says the siding got hit as well.

She says the City of Gaithersburg is investigating her situation.

Joseph Belcher and his wife Kristi have lived in their Germantown home for two years.

On Friday morning, Kristi Belcher saw “a giant pile of snow barreling at our house, hitting our roof, covering our yard.”

They say their 3-year-old son was near a window when rocks also came over the wall.

“It was literally on a collision course with where he was when it happened,” Joseph Belcher says.

“I didn’t think we would have to worry about rocks getting shot through out windows when we moved here.”

The couple has been in contact with a state agency about their damages.