It will look a little like the London Eye and offer a view of the D.C. skyline. Now construction has begun on the Capital Wheel.
Listen now to WTOP News WTOP.com | Alexa | Google Home | WTOP App | 103.5 FM
(1/7) 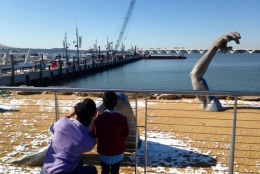 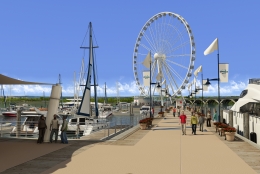 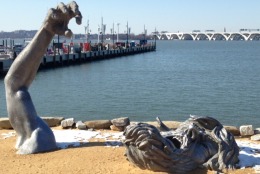 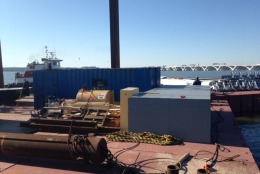 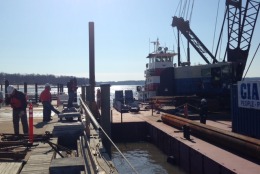 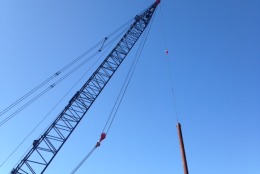 WASHINGTON – It will look a little like the London Eye and offer a view of the D.C. skyline. Now, construction has begun on the Capital Wheel.

It took 50 hours to tow the more than 100,000 pounds of steel down from Curtis Bay near Baltimore where it was loaded.

The 175-foot wheel will eventually be secured and rise from one of the piers of National Harbor.

“It was a challenge getting it here with ice in the bay,” says Mike McGeady of Cianbro Construction, who has the contract to construct the wheel.

Weather pushed the project timeline back a few weeks. Now, the wheel is set to open in late May. It certainly doesn’t look like a wheel now.

“I actually thought more pieces would be put together on the barge, but we got to see it coming in,” says Kimberly Debarros, who brought her son to see it on Tuesday.

She stood watching with her son, Johan, from the boardwalk as the crane raised support beams in the air.

The Capital Wheel was just an idea a few years ago, now principal owner John Peterson is seeing his vision become reality.

“When you’re a kid growing up, if you had an erector set — that’s exactly what this is. They’re going to put the decking in and then put it together piece by piece,” Peterson says.

His company is taking a timelapse video of the construction. He says they plan to post it so you can see the wheel built in a matter of minutes.

This is how it will look through the stages of construction: