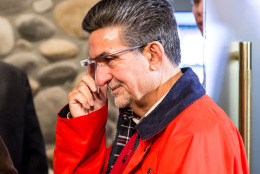 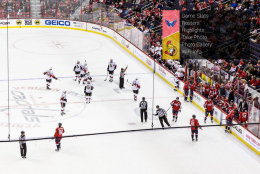 WASHINGTON – Ted Leonsis knows a thing or two about consumer technology, and putting fans in seats at hockey games.

Embracing cutting-edge technology, and making it accessible to fans is a major part of the vision of the Washington Capitals owner, whose team has sold out every game at Verizon Center since March 5, 2009.

“I think it’s very important for us to be innovators,” says Leonsis, who spearheaded the success of AOL, during his almost 14-year career at the online giant, formerly known as America Online.

Leonsis is the CEO of Monumental Sports & Entertainment, which owns the Capitals, Wizards, Mystics and the Verizon Center.

The app, called Skybox, is developed by APX Labs, in Herndon.

Brian Ballard, CEO of APX Labs, says “Verizon Center is one of the most connected arenas in pro sports, so we can actually deliver something real time.”

With the Google Glass wearable computer, built into an optical head-mounted display, fans using Skybox can view highlights and team stats handsfree, without having to look at their smartphones.

Glass executes tasks with verbal commands, by tapping the eyewear frame, and winking.

“Being able to blink their way to a deeper, richer experience I think is going to be something special,” says Leonsis.

Leonsis says Washington is the most wired community in the country, and he’s determined to stay ahead of the constantly-changing technology curve

“We’re soon going to live in this era of “The Internet of Things,” says Leonsis. “It’s not just your computers and devices that are connected, it’s things that are personal – your jewelry, your watches, your rings, your refrigerators, your cars, and now your glasses.”

Leonsis says he wants Washington fans to feel confident his teams and organization will be the first to market with new technology and services.

And it’s not that he’s a tech geek. Leonsis is a businessman.

“With HDTV and this two-screen world where people sit on their couch and they’re connected with their friends, we have a lot of competition when you own a team, and we need to make sure people want to continue to come to arenas, and that they’re wowed.”

With so many options for gathering content on-demand, Leonsis says “I want what I want, when I want it.”

In an increasingly-connected world, “Technology is becoming more and more personalized,” says Leonsis. “It will be atmospheric.”

“That data will be processed and used to make our lives more convenient. Now, we have to make sure everything is safe and secure.”

While Glass is still not available to the public, and criticized by some for being impractical, Leonsis believes the uses and user interfaces for wearable computers will continue to improve.

In fact, Leonsis envisions Google Glass helping him interact with visitors to the Verizon Center.

“I’d love to wear it, and walk around when I see a fan to say ‘Hey, Joe, how you doing, I understand you’ve been a fan and season ticket holder since 2000.’ It’d be great to have that kind of instant connection and identity,” says Leonsis.

“There’s another company in town, SocialRadar, they’re trying to do some applications like that,” says Leonsis, who is an investor in SocialRadar.

“When you walk into a room, it would come up on your Google Glass — who’s on your buddy list, who’s on your social network that’s here, pull their picture up.”

A spokesperson for Leonsis says there have not been discussions yet about integrating the SocialRadar technology into the Verizon Glass experience before the application is available to the public.

“That kind of world, where you have to opt-in to make sure you’re comfortable in that environment, is going to be here very, very quickly,” says Leonsis.