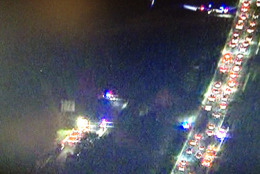 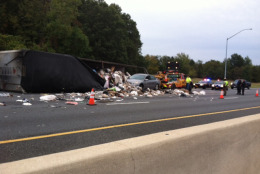 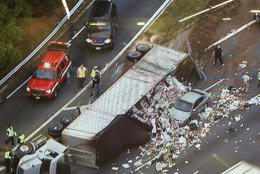 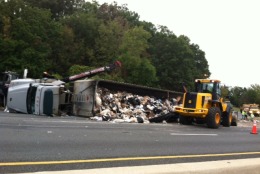 A fatal crash and investigation caused major delays for commuters on the Baltimore-Washington Parkway Wednesday morning.

Both northbound and southbound lanes of the Baltimore-Washington Parkway closed to traffic in Jessup, Md., after a vehicle struck a man on the roadway at about 5 a.m.

The man, whose name has not yet been released, was hit by a vehicle that was traveling south on the parkway, according to Park Police spokesperson Sgt. Paul Brooks.

The driver of the vehicle stayed at the scene, Brooks says.

Another nearby crash Wednesday morning caused delays on the Outer Loop of the Capital Beltway.

Trash littered part of the Outer Loop in Prince George’s County after a tractor trailer carrying garbage overturned just past the exit for the northbound Baltimore-Washington Parkway at about 7 a.m. The crash initially shut down all lanes, but officials later reopened lanes as they cleared the trash. The highway fully reopened just before 1 p.m.

It is not clear what led to the accident or if anyone sustained injuries in the crash.

Hazmat crews responded because of a fuel spill.