A bunch of people held up signs on the Key Bridge Wednesday evening, but it was the opposite of a protest.
Listen now to WTOP News WTOP.com | Alexa | Google Home | WTOP App | 103.5 FM
(1/4) 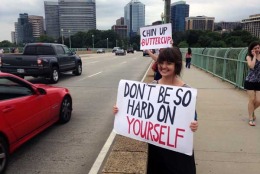 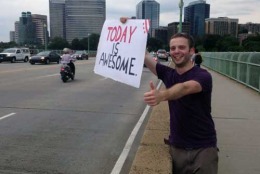 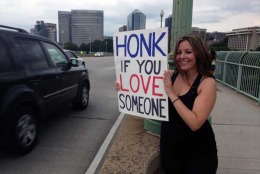 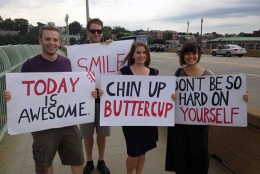 WASHINGTON – A bunch of people held up signs on the Key Bridge Wednesday evening, but it was the opposite of a protest.

The event was organized by Make DC Smile, which is celebrating one year of spreading positive messages in our area.

Responding to a Facebook call for volunteers, a small group showed up at the Key Bridge to hold up signs facing outgoing traffic with messages like “Today is Awesome,” “Chin Up Buttercup” and “Honk if you Love Someone.”

Many drivers responded by honking, yelling and giving thumbs-up.

“The way I look at it is, even if we affected or changed one person’s outlook on the day ahead, then it’s just mission accomplished,” he said.

Adibpour, who is 30-years-old, says the movement was born out of his own personal bucket list of 100 things he wants to do in the next 20 years.

“Sometimes we just need to stop and just think about what truly makes us happy,” he added.

Massoud, who already has a full time job, says the positivity campaigns will continue, and he might eventually start a nonprofit.

He says the effort has been surprising for him, not just because of the reaction he’s getting from other people.

“The greatest part about it is that I had no idea that I was going to be such a happier person actually by doing it.”