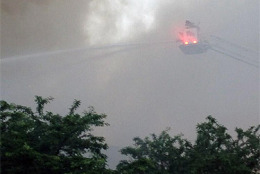 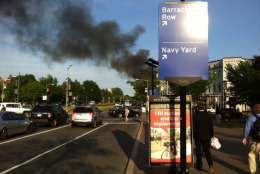 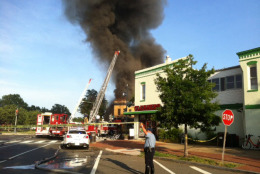 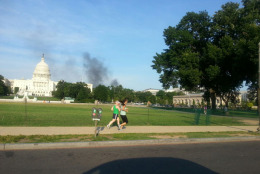 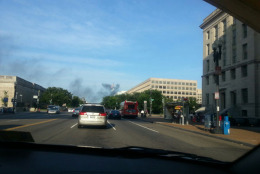 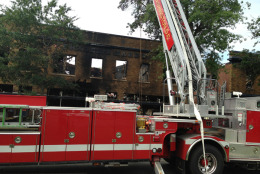 WASHINGTON – A ferocious fire ravaged a Capitol Hill landmark on Wednesday night, destroying a store some say is an “institution” in the city.

Frager’s Hardware, on Pennsylvania Avenue, opened in 1920 and has remained in business for 93 years.

“My intention is to see that it’s rebuilt,” Nick Kaplanis, the general manager, said after the fire devastated the business.

“It was like a gathering place. We tried to make sure that people who didn’t want to go to the suburbs could come here and get whatever they needed.”

The blaze sent thick black smoke that could be seen for miles billowing into the sky above the Capitol Hill neighborhood. The heavy smoke and deteriorating air quality made it difficult to breathe in parts of Capitol Hill and Eastern Market as the fire continued to burn, leaving a dark cloud hanging over the neighborhood.

The cause of the fire is still under investigation, and members of the federal Bureau of Alcohol, Tobacco, Firearms and Explosives were on the scene Thursday morning to assist with the probe. John Weintraub, one of the store’s owners, says the fire started in a lumber area of the store.

Deputy Chief John Donnelly of D.C. Fire and EMS said he is confident officials will find the cause of the fire but that he expects the investigation to last at least five days. As of 6:30 a.m. Thursday, firefighters were pouring water on the still- smoldering scene of the blaze.

The eastbound lanes of Pennsylvania Avenue SE remain closed from 10th to 12th streets. The closure will remain at least until the fire investigation is complete. D.C. police say message boards are being deployed for long-term closures.

D.C. Mayor Vincent Gray said he used to shop at the store.

“It’s just sickening to have to look at this hardware store, which is really a staple on Capitol Hill, and see what this fire has done to devastate what I call an institution,” he said. “We’ll try to work with them if they choose to restore it, because I know people swear by Frager’s.”

The massive effort to battle the four-alarm blaze involved as many as 200 firefighters and multiple District agencies, as well as the National Guard, Donnelly said. Fire crews were first called to the store at about 6:30 p.m. Wednesday and evacuated the building.

Firefighters initially tried to put out the fire from inside the hardware store but were quickly forced out of the building. They instead battled the blaze from the air, using water towers to beat back the flames.

At times, 20,000 gallons of water per minute were poured onto the fire, Donnelly said.

Crews needed almost three hours before they were able to suppress the visible flames, but the fire was still burning and continued to pour smoke into the air. The fire also spread to at least two other buildings, where crews were able to halt it from spreading farther.

All store employees were accounted for and none was injured. However, three firefighters were sent to the hospital with minor injuries.

“The biggest challenge is this is a large building with a lot of things in it. That provides access problems,” Donnelly said.

The District’s hazardous materials team and the National Guard’s chemical support team were actively monitoring the air quality during the firefight, he said. Officials had urged residents to stay indoors and to close their doors and windows to avoid the smoke.

News that a fire had struck the store shocked residents who lined the blocks near to watch, gasp and take photos.

D.C. Councilman Tommy Wells, D-Ward 6, said in addition to the sentimental loss, he was worried about the flammable materials housed in the hardware store and the risk the paints and propane tanks posed.

“It’s a volatile situation because of everything that is stored at the hardware store,” Wells said Wednesday. “This is a really dangerous situation for our firefighters.”

The intensive firefight also snarled traffic heading toward the area. Police shut down streets from 9th to 13th streets and G to D streets SW to make room for the fire engines while the fire burned and to keep cars and pedestrians out of harm’s way, D.C. police said.

Firefighters from neighboring communities also covered stations and others were sent to help battle the hardware store fire.