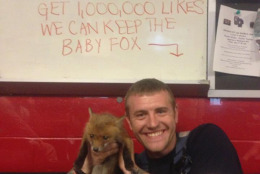 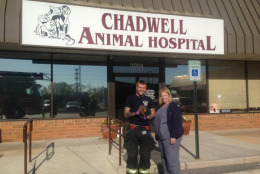 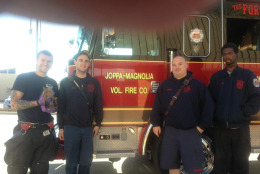 WASHINGTON – A recent happy rescue by Maryland firefighters has turned sad for animal lovers due to public health concerns.

The Baltimore Sun reports members of the Joppa-Magnolia Volunteer Fire Company responded to a call at about 10 p.m. Tuesday and found a baby fox trapped in a storm drain on Melwood Court in Edgewood.

After firefighters climbed down to retrieve the kit, Dave Collins tells CBS Baltimore he tried to release the animal next to the woods, but the fox didn’t take the bait. The group also noticed the fox appeared injured, but couldn’t get ahold of county or state animal control officials.

So the fox — which the firefighters named Pierce — was taken back to a fire station. The group eventually connected with an animal hospital employee who gave them instructions to care for the fox until he was taken to the hospital the next day.

CBS Baltimore says the fox later was taken to Phoenix Wildlife Rescue and was in weak condition.

(Editor’s note: Animal lovers may wish to stop reading at this point.)

The fox was taken to a fire station overnight. (Screenshot <a href="http://www.abc2news.com/dpp/news/region/harford_county/firefighters-save-care-for-baby-fox">ABC2News</a>)

As reported by The Dagger — a Harford County news site — the fox later was euthanized due to rabies protocol testing. It later tested positive for rabies.

The Harford County Health Department says if the fox is found to have been rabid, officials will also conduct risk assessments for firefighters that may have had contact with the animal.

“The greater concern in incidents such as this, is less about the animal than for public health and safety,” the health department says in a news release.

The kit also appears to have suffered from hydrocephaly, which could have caused the animal to cry from discomfort and may have led to its abandonment by its mother.

The health department also says while it appreciates the firefighters’ good intentions, it recommends limiting the handling of such an animal to one person in heavy gear, as well as isolating the animal.

See the county’s full release below: