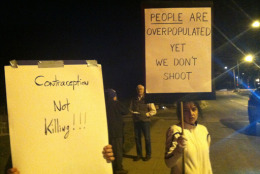 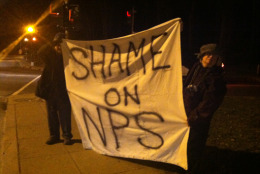 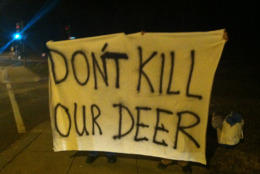 “The consideration is that they’re overpopulated. So are humans. So, how moral would that be for us to shoot humans?” says rally participant Lenka Fill.

“The way we understood it, they were going to kill the deer in late fall and winter. It’s no longer winter,” says rally participant Anne Barton who lives near the park.

WTOP reached out to the Park Service for more information, but has yet to be granted an interview.

“Safety is our top priority and we will conduct management actions in the safest manner possible,” Superintendent Morrison said in a news release from the National Park Service.

The park service says in the release that highly trained sharpshooters from the U.S. Department of Agriculture will work mainly at night, when the park is closed.

Opponents whose lawsuit to stop the hunt was thrown out by a federal judge say they are shocked that the hunt is going forward in the spring because Park Service documents say the sharpshooting would happen primarily at night during late fall and winter months.

“Sharpshooting with firearms will occur primarily at night (between dusk and dawn), during late fall and winter months when deer are more visible and fewer visitors are in the park.”

The document goes on to explain that “bait stations” will most likely be used to attract deer to specific locations.

In sharpshooting operations, deer are baited to a location away from public areas so that they can be more efficiently shot all at once and so that the process is safer for both the hunters and the public.

Active herd reduction efforts are intended to reduce the density of deer in Rock Creek Park from over 70 per square mile, which is the current density, to 15 to 20 per square mile within three years. Once the herd size is healthy again, the park service says management efforts will work to keep it at that level.

The following road closures will be in effect from 10 p.m. to 4 a.m. on March 27 through 30, when sharpshooting is underway: