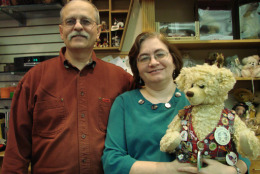 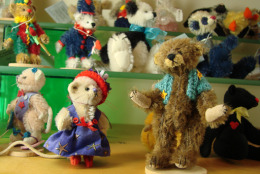 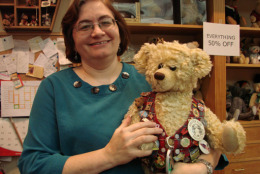 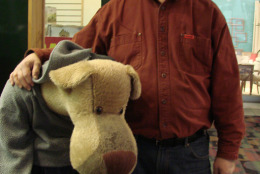 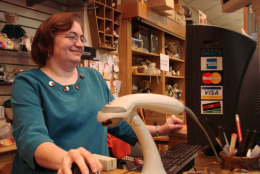 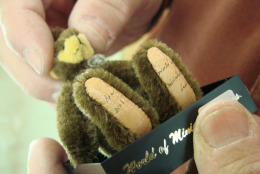 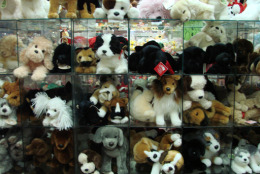 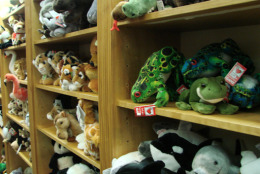 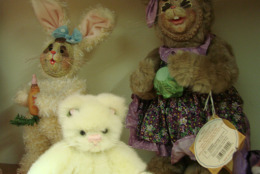 Behind this counter sits Elizabeth Taylor, 48, and her husband Bill Taylor, 55, co-owners of Agape Bears, a small teddy bear store in Ballston Common Mall. The store has been open for more than 15 years, steadily growing from a place to sell Elizabeth’s handmade bears and collectibles to a beloved stuffed animal shop in Arlington. But after years of gaining loyal customers and organizing bear donations for local fire and police departments, Agape Bears is closing on Sunday.

“I feel like this is a fixture of the community,” Bill says, “and we’ve tried to make it that way. We’re more like big-hearted people than we are business people.”

Never ones to shy away from their customers’ personal lives, the Taylors sometimes acted as unofficial therapists. The warm demeanor of the owners and store was often an invitation for many bored or lonely customers to approach them or even extend an invitation for Christmas dinner.

Elizabeth adds that some customers didn’t have anyone else to talk to, and she didn’t mind being there for them.

“There’s not a whole lot of stores where you can go in and the salespeople are friendly, and you do get people sometimes who just need someone to listen to them,” she says.

Agape Bears is one of the rapidly disappearing stores that evoke a feeling of home, Bill says. It’s a callback to old country stores that sold glass Coca-Cola bottles and had a front porch where shoppers could buy hardware, milk or fishing gear all at once.

Leaning on the glass counter, Bill reminisces about a general store his uncle owned in Oklahoma, saying that’s what he wanted Agape Bears to resemble. Bill used to play in a band and would host informal jam sessions in Agape Bears, where he would bring his bass and have a “picking session” with people who brought their guitars.

Though he says he and his wife weren’t making a profit off the store in recent years, they kept it open because of the people.

On a Saturday in early February, Arlington resident Sharon Smith came into Agape Bears to shop for a bear. She didn’t hide her disappointment that the store was closing.

“You can always walk in and find something for any holiday or occasion, so it’s a shame that it’s closing,” Smith says.

Charity work with Good Bears of the World

The Taylors are members of the nonprofit Good Bears of the World, which donates teddy bears to victims of natural disasters such as Hurricane Katrina or victims of domestic violence, according to GBW chair Terrie Stong, 68. The GBW also raises money to buy teddy bears to give to police and fire departments across the nation and sometimes works with the Red Cross at disaster scenes.

Agape Bears is the official Arlington store sponsor for GBW, one of many stores which span across the U.S. The store helps raise awareness about GBW and acts as liaison between the organization and local emergency responders.

“Everybody that’s involved in the teddy bear world — manufacturers, artists, collectors — know about Good Bears,” says Stong, who lives in Toledo, Ohio. “But if you’re not affiliated with teddy bears, it’s hard to get the word out about your charity.”

As the Arlington GBW representatives, Agape Bears has donated bears to the Arlington, Alexandria, D.C. and Fairfax police and fire departments since it opened in 1998. But it was the experience working with the GBW on Sept. 11 that drove home the impact of their work for the owners. The Taylors personally handed out more than 450 bears to victims of the attack on the Pentagon.

“There wasn’t much talking,” Elizabeth says. “Everyone was in such shock from what had happened. There were a lot of tears, there were a lot of people who kind of just grabbed the bears and went and sat down quietly.”

“You can see a direct impact from your work, and you know the value of what you’re doing,” Elizabeth says.

In addition to charity work, GBW supports bear makers, who the Taylors refer to as “artists.” Artists often donate their supplies or bears to the GBW and participate in the organization’s bear shows and auctions.

“It’s a hidden (community),” Elizabeth says. “You don’t realize it, then all of a sudden you go, ‘Wait a minute, there’s all these people doing this.’ ”

Elizabeth has been making bears for more than 20 years, starting when bear-making was in its heyday in the 80s, when she says many artists were “creating, designing and really innovating in terms of materials.”

The Taylors supported independent bear artists such as Deb Canham and Jamie Wu, who create homemade bears specially signed by the artists with a one-hair brush on the feet pads. After Agape Bears closes, Bill and Elizabeth will continue to sell these specialty bears on their website.

Elizabeth has a special investment in the teddy bear craft and hopes to dive deeper into the art world once she and her husband retire.

“There’s just something about (bears),” Elizabeth says. “They tend to talk to me, you tend to look at them and you get a sense that they’re not inanimate, that there’s a soul — not even a soul — like there’s something there.”

Gov. Kemp faces next test from Trump loyalists in Georgia