Winter has not been kind to many presidents and the inaugural committees in charge of coordinating the day\'s events. We have a list of the worst Inaugural Day weather.
Listen now to WTOP News WTOP.com | Alexa | Google Home | WTOP App | 103.5 FM
(1/3) 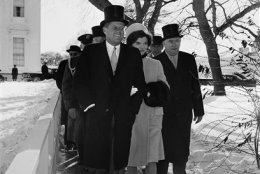 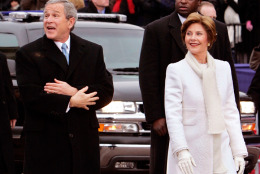 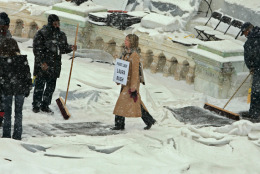 WASHINGTON – The weather during past presidential inaugural ceremonies has run the gamut from fierce snowstorms to blinding rain to mild temperatures and sunny skies.

Winter has not been kind to many presidents and the inaugural committees in charge of coordinating the day’s events.

Since President Franklin D. Roosevelt’s second term, the inaugural ceremonies have been held outdoors during the heart of the winter season, normally on Jan. 20. The average high temperature on Jan. 20 in Washington is 43 degrees.

Typically the coldest time of the year, late January can also be the most tempestuous period for Washington weather.

A few inaugurations have been marred by strong storms and fierce winds.

Franklin Roosevelt’s second inauguration took place on a raw, soggy day with heavy rain and temperatures hovering just above freezing. A record 1.77 inches of precipitation fell, much of it recorded around mid-day and during the swearing-in.

A major January blizzard the day before President John F. Kennedy’s inauguration caused near white-out conditions in Washington through the early morning. Crowds waded through 8 inches of wind-blown snow during the swearing-in as temperatures hovered in the low 20s.

Of the past 19 January inauguration days, six have featured some form of measurable precipitation.

Still, some of the nation’s past presidents have enjoyed mild weather on their first day in office.

President Ronald Reagan was greeted with a daytime temperature of 55 degrees – making his the warmest January inauguration – and mostly cloudy skies for his ceremony in 1981.

His second inauguration, however, was the coldest on record, with a noon temperature of 7 degrees above zero.

George H. Walker Bush’s ceremony was held on a breezy afternoon with temperatures in the low 50s.

According to the WTOP Weather Center, President Barack Obama’s second inauguration will be cold with temperatures in the 30s.