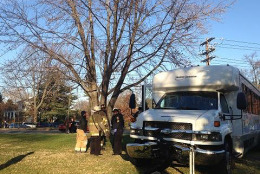 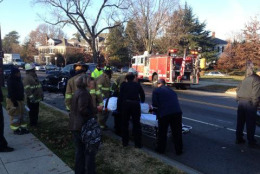 The chain-reaction accident occurred in the 4100 block of Nebraska Avenue. WTOP’s Kristi King reports a Reston Limousine limo bus carrying children from the Friendship Heights Metro station to The Field School in Northwest had its back window shattered during the wreck.

The 51-year-old limo bus driver and a 14-year-old on the bus suffered injuries that were initially considered serious, according to D.C. fire officials. The bus driver may have a broken ankle, and Battalion Chief Brian Lee says the 14-year-old possibly was ejected from the limo bus. A spokesman later said none of the injuries in the crash are believed to be serious.

A spokesman for the school says all 18 students have been released, and all but one returned to school before the end of classes.

A 16-year-old and a 32-year-old were driving the other vehicles involved.

The bus was operated by the Virginia-based the Reston Limousine.

Ray Kern, of Silver Spring, Md., had his Honda Civic showered with glass from the accident.

The “back window of the bus shot out and apparently … somebody had fallen up against it – they fell out of the bus,” Kern says.

This story has been modified to say the teen was “possibly” thrown from the bus and to accurately reflect where the accident occurred.

The Associated Press and WTOP’s Kristi King contributed to this report. Follow @KingWTOP and