A protest that was calm and peaceful took a turn just after 11 a.m. Thursday when the group moved into the street, blocking Wisconsin Avenue in both directions for about a half hour.
Listen now to WTOP News WTOP.com | Alexa | Google Home | WTOP App | 103.5 FM
(1/8) 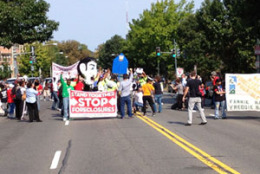 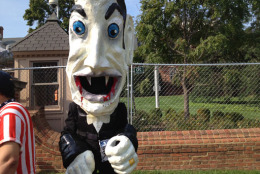 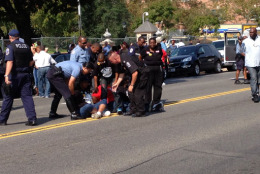 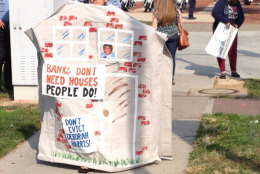 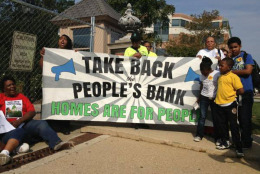 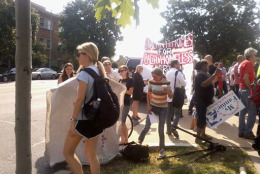 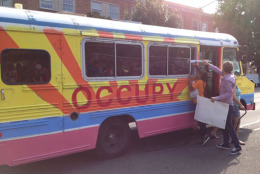 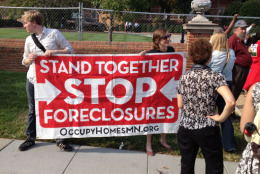 WASHINGTON – A D.C. protest that was calm and peaceful took a turn just after 11 a.m. on Thursday when the group moved into the street, blocking Wisconsin Avenue in both directions for about a half hour.

Wisconsin Avenue reopened at 11:40 a.m. after police moved protesters out of the street.

Metropolitan Police arrested five women who were given three warnings to move out of the street, where the group was blocking traffic. During that time, traffic was unable to pass in either on Wisconsin between Porter and Van Ness streets in Northwest.

The group was comprised of more than 100 adults and children, who were protesting against foreclosures.

Dozens of protesters were holding signs attempting to tell the story of individuals and families who have been foreclosed upon. There was even a person dressed as a vampire.

The group began marching down Wisconsin Avenue behind a sign that read “Stand Together Stop Foreclosures.” They say they are glad they caused a disruption and hope executives at Fannie Mae take notice.

Fannie Mae released a statement after the protest.

“We respect the right to protest and voice opinions. Every day, Fannie Mae is focused on helping homeowners who are struggling. The bottom line is that we want to prevent foreclosure whenever possible,” said the statement.

“Foreclosures are bad for everyone – for Fannie Mae, for taxpayers, for lenders, for servicers – but most importantly, for homeowners and their communities. We have the options to prevent foreclosure if a homeowner reaches out early for help to pursue their options.”