Veterans and family members of World War II gathered to celebrate the end of the war Sunday on the National Mall. Japan formally surrendered aboard the USS Missouri in the Pacific 67 years ago and is known today as V-J Day.
Listen now to WTOP News WTOP.com | Alexa | Google Home | WTOP App | 103.5 FM
(1/3) 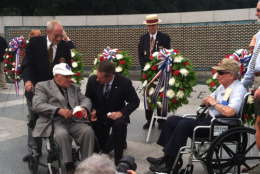 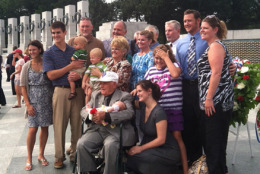 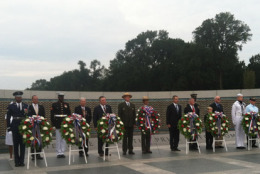 WASHINGTON — It was the deadliest war in human history and on September 2, 1945, World War II ended.

Japan formally surrendered aboard the USS Missouri and the Allies claimed victory over the Axis powers. General Douglas A. MacArthur, Commander of the Allied Powers in the Pacific, signed the documents and that day, 67 years ago, would be known as V-J Day, or Victory over Japan Day.

Millions of people died in World War II, including more than 400,000 Americans.

Today, dozens of veterans and their families paid tribute to those who did not come home and celebrated with those who did.

Retired USMC First Sergeant James Nocifora was chosen to place a wreath in front of the Freedom Wall where 4,000 stars represent the Americans who died in the war. “You remember the friends who were killed. You remember the end of the war so more wouldn’t have to be killed,” Nocifora said. The honored veterans were accompanied by members from each branch of the military.

Nocifora shared the honor with his family including his children, grandchildren, and great-grandchildren. “I’d go back again if I had to,” he said, “for God and country.”

General Peter Pace, who is now retired from the Marine Corps, gave the keynote address thanking the veterans and their families for their lifetime dedication to the United States military.

Lt. Gen. Mick Kicklighter, who retired from the Army and now chairs the Friends of the National World War II Memorial, said these veterans gave the ultimate sacrifice. “They didn’t just save our country, they literally saved the world,” he said.