The Situation: The state of U.S. national security in 2012 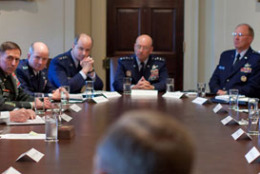 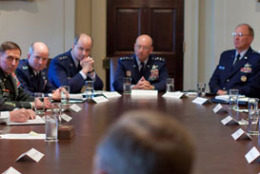 Editor’s Note: In the last four years, WTOP National Security Correspondent J.J. Green has tracked the threats, policies and vulnerabilities dominating national security in the U.S. and beyond. Read more here about what went into this series.

Part 1: Then and now

Then, as now, top U.S. national security officials were preoccupied with capturing or killing top al-Qaida leaders, returning Iraq to a peaceful U.S. ally and turning the tide against the Taliban in Afghanistan.

Also hanging over their heads were Iranian speedboats harassing U.S. Navy vessels in the Persian Gulf and rumblings that North Korea was about to launch another missile that could possibly reach U.S. territory.

But most profoundly, then, as now, being approximately 60 days away from a presidential election, they worried about whether they would keep their jobs.

In 2008, very few of them did as a president from a different party was elected. On Jan. 15, 2009, President George W. Bush told the nation goodbye saying, “And so my fellow Americans, for the final time, goodnight. May God bless this house and our next president. And may God bless you and our wonderful country.”

Five days later, as Bush flew off into history, President Barack Obama assumed the mantle of responsibility. Around the same time, some dark and disturbing clouds were gathering.

“There were people out there who if they could conduct mass casualty attacks would,” said Michael Hayden, director of the Central Intelligence Agency at the time.

One of those people was Kuwaiti professor Abdallah Nafisi, who during a stunning lecture in early 2009 said, “Four pounds of anthrax in a suitcase this big (while gesturing with his hands to describe a small carry-on piece of luggage) … are guaranteed to kill 330 Americans in a single hour if it is properly spread in population centers there.”

Nafisi, who had connections with al-Qaida, was openly recruiting volunteers to slip into the U.S. through the tunnels of Mexico and go to 1600 Pennsylvania Ave. to launch an anthrax attack.

It did not happen. He slipped into the background and has been quiet since. But many worry the seed has been planted.

The U.S. has put its foot down on cybersecurity, publicly called out Russia and China for their aggressive espionage efforts against the U.S. and developed technology that gives the military the ability to fly anywhere in the world in under one hour.

But something that no policy, human being or technology can predict or control has emerged and is threatening to become the next stubborn threat to the U.S.

One of the most insidious potential threats facing the U.S. is “the pace at which the world is moving,” said retired Lt. Gen. Ronald Burgess, former director of the Defense Intelligence Agency.

“What we have seen happening around the world has shown us that we’re going to see an accelerated pace (of major global events),” Burgess told WTOP before leaving his post.

Burgess, like many of his predecessors and contemporaries, is a student of world events and as his career progressed, he saw the coming of a perfect storm. To face the test, he said, “We as an intelligence community are going to need to adapt to that continuing pace of change. And we’re going to have to do that in a more fiscally constrained environment.”

One of those predecessors is former National Security Adviser Brent Scowcroft, who served under presidents Gerald Ford and George H.W. Bush. He says many of the challenges the U.S. faces are new and different. They’re challenging in that there are no obvious solutions to many of them.

Gen. James Jones, President Obama’s first national security adviser, said in an interview that the pace of change to which Burgess referred forced the Obama administration to shift and adopt a different strategy.

“We were trying to understand this very, very different 21st century and how the U.S. competes in it now that we have peer rivals in different parts of the world,” Jones said.

The rivals that Jones referred to included China and Russia.

“Our mission is to prevent strategic surprise for the president, policymakers, the military and the balance of the intelligence community,” Burgess said.

“I wouldn’t take Russia off the list. When you’re sitting there with as many nuclear missiles as that country has, it’s always somebody I have to keep an eye on as an intelligence person,” he said.

NEXT: Shifting the strategy to face the 21st century