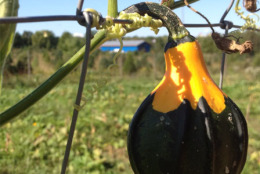 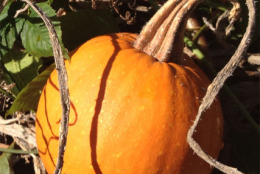 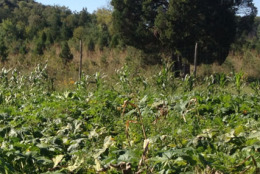 The ongoing heat, and few soaking rains meant the farm had to plant pumpkins three times before they took.

“The high heat on the leaf basically cooked everything, so it took three plantings to get them going this year,” Taylor says.

In Maryland, effects of last year’s wet summer, which included hurricanes and floods, is still affecting Butler’s Orchard, in Germantown.

“Last year’s pumpkins had disease on them, and when they died they left disease behind, which can cause a problem if you don’t rotate fields. I was hoping to get lucky,” says Wade Butler, co-owner of Butler’s.

“This year the pumpkins looked good, they came up. Then after a thunderstorm a plant dies, and then another dies,” he says.

Butler says the disease continued to flourish, despite this summer’s lack of rain.

“If you have fruit you see spots, then fungus, then it just kinda melts and goes to mush,” he says.

Both farmers report weeds loved the heat and lack of humidity, meaning pick-your- own fields are being thinned of invasive plants.

The color of the pumpkins is temporarily affected because of the late start.

“Right now the pumpkins are green and orange,” Taylor says. “It’ll be a couple weeks before they’re complete orange.”

Both pumpkin growers expect to buy pumpkins from growers in other parts of the country, to meet their needs, yet say consumers will pay less for their jack-o- lanterns this year than last.

“I had to go all the way to Michigan to get pumpkins,” Butler says of the 2011 shortage caused by excessive moisture.

“We’ll keep our prices the same for our customers,” Taylor says. “The increase in work costs us a little bit more, but we try not to gouge the market, like a lot of people do.”