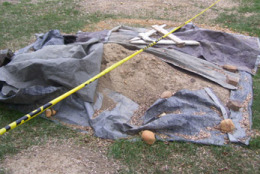 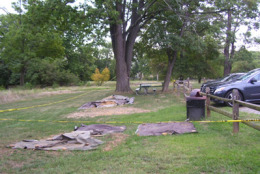 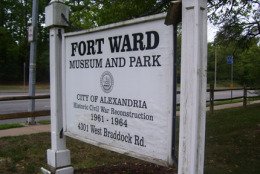 ALEXANDRIA — If you come to Fort Ward Park in Alexandria, you’ll see people running or walking their dogs and taking advantage of this open space.

Fort Ward was built by the Union Army to protect Washington, D.C., during the Civil War. Now it’s a historic site. But an archaeological dig at the park identified the location of 43 graves, confirming that a portion of the grounds was once used as a cemetery.

The dig also found the site of what was once the “Fort Community,” a post-Civil War, African-American community that was occupied until the 1960s.

“We’ve been working since 2009 after it was brought to the city’s attention that there may be some unmarked graves in the park, “says Lance Mallemo, the Historic Alexandra Office director.

He says a shovel test survey was done across the park on the 30 to 35 acres that are listed on the National Register of Historic Places.

About 1,300 small holes were dug. They were each about two to four feet in diameter and up to four feet deep and they were dug every 30 feet, says Mallemo.

The small holes acted like windows into the past. He says the holes gave archaeologists an idea if they could identify an area of significance.

He says the 43 graves that were found in the park will be fenced off and all the graves, for now, will have blank markers. He says when, and if, the remains are identified, the person’s name will be added along with any other information that is discovered. Three of the graves did have headstones.

Mallemo says the dig is considered finished but more work could be done as part of a park management plan that’s being prepared.

The plan will protect resources for the future. He says the plan is needed to avoid putting a picnic table in a burial area, for example.

He says there’s a policy in place that prevents digging in the park unless an additional survey or review is done in that area first.