Getting a Natitude as Nats open home season

Preparations are under way for the Nationals home opener against the Reds. WTOP has a look at the behind-the-scenes action and what you need to know to get to the 1:05 p.m. game.
Listen now to WTOP News WTOP.com | Alexa | Google Home | WTOP App | 103.5 FM
(1/3) 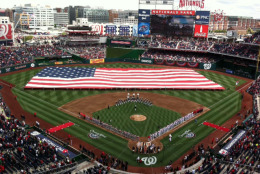 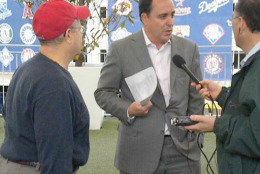 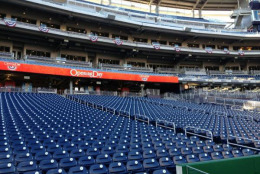 WASHINGTON – Before the sun came up, preparations for the home opener got under way at Nationals Park.

The grounds crew, the vendors and the players started filtering in early Thursday to get ready for the 1:05 p.m. game against the Cincinnati Reds.

The game is a sellout. The Nationals expect 41,000 fans. Standing-room-only spots are available to see Gio Gonzalez make his D.C. pitching debut against Mat Latos.

Many fans plan to hop on Metro to get to the stadium in Southeast. Here are some tips for taking Metro to the game.

WTOP’s Neal Augenstein has been at the ballpark all morning capturing the behind-the-scenes action.

Fans headed to the game will find some new things at the stadium and neighborhood:

Among those on hand early Thursday was racing President Teddy Roosevelt whose losing streak is closely followed by fans.

Much has been made of Teddy’s losing streak, so much so that WTOP sent Brennan Haselton out to find out the back story and to look into whether Teddy’s losses are a conspiracy.

Neal Augenstein captured this video of Teddy getting ready for the game.

Neal has been tweeting from the ballpark. Here are some of the pictures Neal took Thursday morning:

Of course, the Nationals aren’t the only hot team in town. The Caps are embarking on their journey toward the Stanley Cup.

WTOP wants to know what you think. Take the poll: Nats or Caps? Which team will have most success?