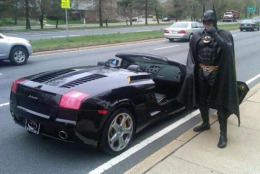 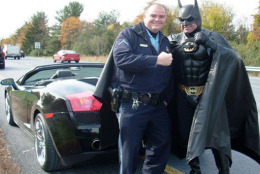 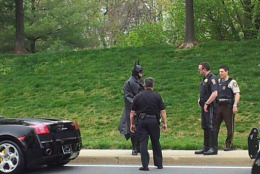 SILVER SPRING, Md. – The identity of the man behind the Batman mask pulled over last week by Montgomery County Police has been revealed.

Lenny B. Robinson was pulled over last week for driving his black Lamborghini “Batmobile” without license plates.

Robinson tells The Washington Post that he really plays the Batman role for the kids.

The Baltimore County businessman visits sick kids in hospitals, dressed in a full, professionally-made costume. He hands out Batman gear to cheer the kids up.

Robinson was heading southbound on Route 29 at Prelude Drive.

The back tag on the “Batmobile” was the superhero’s emblem rather than state tags required by law, according to police.

Police say the photo of their officers pulling over Batman became a sensation on Twitter.

A similar thing happened in November, when Batman got a flat tire in Howard County and ended up being helped out by an officer. That officer ended up posing for a photo with Batman.

Apparently, the Dark Knight of Gotham City does answer to law enforcement.