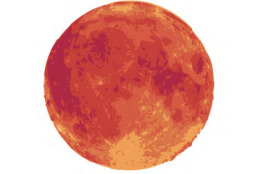 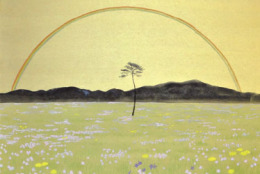 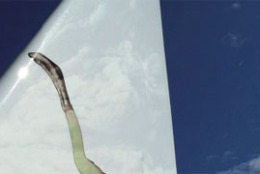 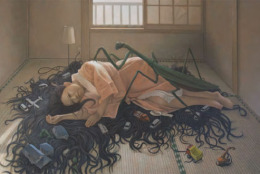 WASHINGTON – On March 11, 2011 at 2:46 p.m., a 9.0 earthquake rocked northern Japan, triggering a massive tsunami that sent walls of water over coastal cities.

The Japanese say Americans have Sept. 11 — they have March 11.

Less than a year after the devastation, Japan is still struggling to recover from the fear and pain that accompanies losing loved ones. It’s been a slow healing process for many, yet a group of young artists have turned to beauty to supplement the tragedy that struck them.

In “2:46 and thereafter,” Tokyo-based art collective DANDANS responds to the earthquake and subsequent tsunami by weaving images of despair with those of hope for a brighter future. All 18 emerging artists are in their 20s and 30s, and remember exactly where they were when the quake hit.

Chiho Akama had just returned from buying art supplies, and was standing in the kitchen washing her hands. Suddenly, her house started rocking. Instinctively, Akama grabbed pots and pans as they dribbled out of cupboards, but then realized her shelves were also coming down. Books and other ephemera spilled onto the floor and then the lights went out.

They stayed that way for many days. Planned blackouts throughout the country left survivors literally in the dark — news was hard to come by since televisions and radios did not work.

When the power finally returned, a common headline started popping up.

“‘Thousands of bodies found on the coastline,'” remembers Akama. “That is when I realized how bad it really was.”

DANDANS artist Shinji Maeda instantly thought of a family member who lived in the northeastern city of Ishinomaki, one of the hardest hit cities by the tsunami. It took him nearly two weeks to travel the 265 miles up the coast from Tokyo because roads were blocked, and the formerly immaculate infrastructure was in shambles. But for Maeda, that didn’t matter.

When he finally arrived in the north, his relative was missing. He asked neighbors and people in the street if they had seen his family, but no one knew anything. They were all hunting for their own loved ones.

Maeda was near losing hope when he got a call from his relative, who had been swept away by the giant waves and clung to whatever he could find. The man survived, but is still recovering from his injuries.

Akama was not so quick to head north. It took her six months. When she finally arrived, Akama was shocked to see that everything looked the same. People hustled to work, hopping on and off trains as if nothing ever happened. But as she got closer, the mirage faded.

“I realized there was still a lot of rubble in the streets,” she says. “It was only then that I realized the magnitude of what had happened.”

Akama remembers seeing parents carrying stuffed animals and flowers to school in honor of their dead children. The emotional damage was evident everywhere she looked, so Akama decided to make something beautiful to offset the horrors of what she saw.

The result is “Lotus, Which Grows Out of the Dirty Mud Yet is Clean.” The piece is based on a traditional Japanese proverb about the flower, which blooms in dirt and mud and yet is considered to be one of the most beautiful in nature. She uses shoes to make up the lotus, while images of rubble comprise the mud.

“When I went to the affected regions, I saw there were other colors [besides brown] — there was white and beauty in between,” Akama says. “There is beauty in the midst of rubble.”

Artist Kazumasa Noguchi found something very similar when reflecting on the natural disaster. He realized that on the night Japan was struck by tragedy, a full moon hung high in the sky. And for every aftershock that rocked the nation, the luminescence remained to provide light for his blacked out country.

His piece “The Moon” is a simple image of a red and orange moon. He describes it as a juxtaposition of peace and beauty intermingled with devastation.

“The Japanese are very good at recovering from destruction. It’s almost masochist,” Maeda says. “We like the chance to heal.”

“2:46 and thereafter” is on exhibit at the Pepco Edison Place Art Gallery in Northwest D.C. through March 25.