A baby girl found in the freezing cold outside of a home in Northeast has died, police say.
Listen now to WTOP News WTOP.com | Alexa | Google Home | WTOP App | 103.5 FM
(1/3) 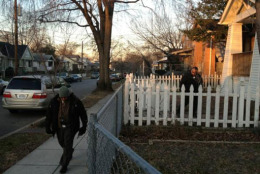 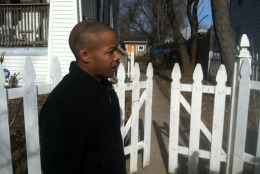 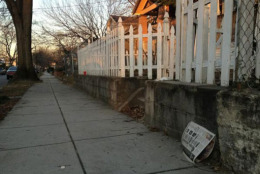 WASHINGTON – A baby girl found in the freezing cold outside of a home in Northeast has died, police say.

The baby was found on a step outside a home in the 3000 block of Channing Street before midnight. Police estimate she was about 1 week old.

“I was praying it was a doll baby,” says Emmanuel Dugger, who says he found the baby while walking to the store. “Come to find out it was an actual child halfway wrapped up in a towel with no … clothes on, no protection.”

“I didn’t hear anything from the child — no response, there was no movement,” he says. “Nothing at all.”

The infant was in cardiac arrest when she was rushed to Children’s Hospital, where she died early Monday, says Metropolitan Police spokeswoman Gwendolyn Crump.

An autopsy is under way, and officials expect to learn the cause of death later Monday.

Police are investigating but have not said who they believe left the baby in the cold or when she was abandoned.

After finding the infant, Emmanuel Dugger went to get his father, Eugene, who brought the baby into their home. They called 911, and Eugene says they placed the child on the dining room table and tried to keep her warm with towels.

The father and son had tears in their eyes as they talked about the infant. They say the baby had blood in her mouth and was bleeding from the nose, but Eugene says the child still was “a beautiful little baby” with “coffee-colored skin.”

“Her whole body was like ice, and her head was just ice-cold,” Eugene says.

“We were hoping and praying for a miracle for her.”

Ian Milne, who lives in the home where the child was found, wished the person who abandoned the child had given some indication she was being left on the step.

“Even a knock on the door and then somebody could take care of it,” Milne says. “It was freezing last night.”

Darnell Stubbs, another area resident, says whoever left the child “should be ashamed.”

D.C. does have “Safe Haven Laws” which allow someone to drop off a child at a safe place such as a firehouse if they’re unable to care for the child.

Virginia and Maryland have similar laws.

To read more about Safe Haven Laws across the country follow this link.