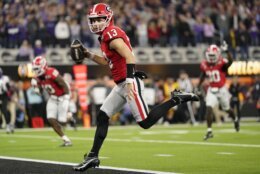 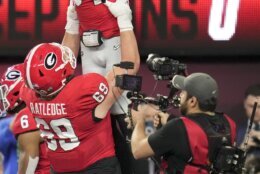 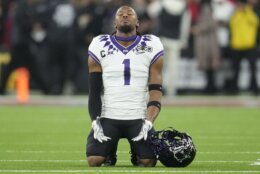 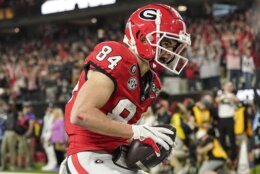 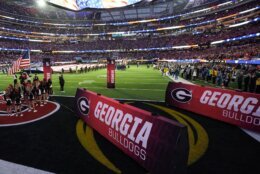 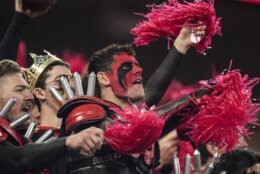 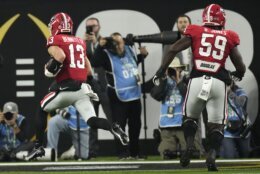 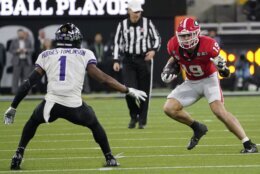 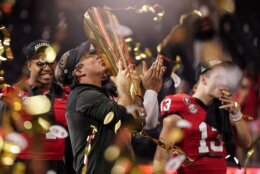 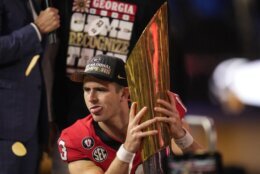 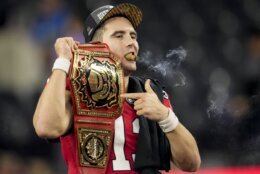 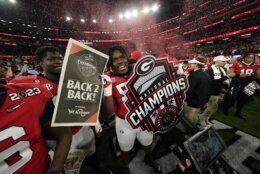 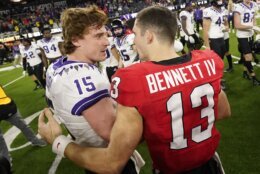 INGLEWOOD, Calif. (AP) — Stetson Bennett flashed a wry grin as he walked off the field, stopping to hug coach Kirby Smart as the crowd roared.

It was all standing ovations and sideline snacks in the fourth quarter of the most lopsided bowl season game in college football history.

In emphatic and overwhelming fashion, Georgia became the first team to repeat as College Football Playoff national champions and left no doubt the ‘Dawgs are the new bullies on the block.

Bennett threw two touchdown passes and ran for two scores — in the first half — as No. 1 Georgia demolished No. 3 TCU 65-7 on Monday night.

The Bulldogs (15-0) are the first repeat champs in major college football since Alabama went back-to-back a decade ago. There appears to be a new dynasty emerging from the Southeastern Conference.

“We wanted our kids to play without fear,” Smart said. “All year I told them, I said, ‘We ain’t getting hunted guys, we’re doing the hunting, and hunting season’s almost over. We’ve only got one more chance to hunt,’ and we hunted tonight.”

TCU (13-2), the first Cinderella team of the playoff era, never had a chance against the Georgia juggernaut. Unlike Michigan in the Fiesta Bowl semifinal, the Bulldogs would not succumb to the Hypnotoads’ spell.

Georgia turned in one of the all-time beatdowns in a big game, reminiscent of Nebraska running over Florida by 38 points in the 1996 Fiesta Bowl, USC’s 36-point rout of Oklahoma in the 2005 Orange Bowl and Alabama’s 28-point BCS blowout over Notre Dame in 2013.

But this was worse.

Too much talent. Too well-coached. Two straight titles for the mean machine in red and black, as the song goes.

No team has ever scored more points in a national championship game, dating to the beginning of the BCS in 1998.

With 13:25 left in the fourth quarter, Smart called timeout in the middle of an offensive drive so Bennett could exit to a hero’s ovation in the final game of his circuitous college career.

“That was special,” said Bennett, who finished 18 for 25 for 304 yards and four touchdown passes. “I’ll remember that for the rest of my life.”

The Bulldogs were munching on chicken wings on the sideline as the game wound down. Then, for the second straight year, the Bulldogs were showered by confetti and presented a championship trophy.

“I love this team, I love those fans, I love our band. I love everybody,” Bennett said during the presentation ceremony. “Back-to-back, baby. Back-to-back.”

The Bulldogs were a different kind of dominant this season after losing 15 NFL draft picks from the 2021 team: not quite as stingy on defense, but more explosive on offense.

“Last year’s team probably had more talent on it,” Smart said. “But this year’s team was different, like they had this eye of the tiger. They weren’t going to lose.”

Earlier in Smart’s tenure at his alma mater, Georgia fans worried about whether the former defensive coordinator for Saban would be able to build an offense to match this high-scoring era of college football.

Under third-year coordinator Todd Monken, the Bulldogs have become prolific, creative and diverse offensively. They picked apart TCU’s 3-3-5 defense from all angles.

The Bulldogs scored all six times they touched the ball in the first half. Twice Bennett ran it in himself; the former walk-on-turned-two-time national champion was barely touched on the two quarterback keepers.

He hit a wide-open McConkey for a 34-yard score in the first quarter, a perfectly executed play out of a bunched formation that had TCU’s defensive backs in disarray. Bennett’s 22-yard score to Adonai Mitchell was a higher degree of difficulty, dropped in over a defender who had tight coverage.

It looked a lot like the Bennett-to-Mitchell touchdown that gave Georgia a fourth-quarter lead it would not relinquish against Alabama in last year’s CFP title game.

Georgia vanquished the Tide last season to break a 41-year national title drought, avenging its only regular-season loss in the process.

There was no such drama against the upstart Horned Frogs.

“The journey was great. It’s something I’ll never forget,” TCU running back Emari Demercado said. “Obviously, didn’t end how we wanted it, but at the end of the day this journey was something great.”

These Bulldogs never had to worry about Alabama. They rolled through the SEC, survived Ohio State in a classic CFP semifinal and then completed a perfect season with a historic blowout.

Bennett hit Bowers for a 22-yard score with 10:52 left in the third quarter to make it 45-7. The sophomore from Northern California signaled touchdown while lying on the turf at SoFi Stadium. Bennett smiled as he tapped helmets with one of his linemen.

Georgia’s famous bulldog mascot UGA could not make cross-country trip to root on his team, but it still felt a little like Sanford Stadium in SoCal.

Many of the TCU fans cleared out with more than half the fourth quarter left, choosing to venture out into a rainy and chilly night rather than watch any more of the massive mismatch.

“I’m disappointed we didn’t make a better show tonight because that’s not indicative of who we are. But we’ll look back — it’s going to take some time for the sting to go away, I assure you — but we’ll look back on the season and build on it from here,” first-year coach Sonny Dykes said.

Heisman Trophy runner-up Max Duggan threw two first-half interceptions in the final game of his roller-coaster TCU career. A four-year starter who never played in a bowl before this season, Duggan led TCU on one of the most improbable runs in college football history.

Unranked after a losing 2021 season and picked seventh in the Big 12, the Frogs won nine games by 10 or fewer points. They were within a victory of the program’s first national title since 1938.

But they ran into a monster.

“As long as you don’t have entitlement in your program, you’ve got a shot,” Smart said. “And right now we don’t have that.”