Holidays: 'Enchant' shines with millions of lights in Nats Park | Where to see holiday lights | Send in photos of decorations | How to give greener this season
Home » College Football » No. 12 Oregon stays…

EUGENE, Ore. (AP) — Bo Nix started the week as a hobbled spectator sitting in the training room getting rehab. He ended it still hobbled, but celebrating on the field after helping keep alive Oregon’s hopes of getting back to the Pac-12 championship game.

Nix threw for 287 yards and one touchdown despite a lower leg injury, Oregon intercept three of Utah quarterback Cameron Rising’s passes and the 12th-ranked Ducks knocked off the No. 10 Utes 20-17 on Saturday night.

A week after watching their hopes at the College Football Playoff evaporate, the Ducks rebounded with a gutty effort that preserved their chances of a fourth straight trip to the conference championship game.

And it was personified by their banged-up quarterback.

“For him to go out there and have a gutsy performance was really important and special for this team,” Oregon coach Dan Lanning said.

The Ducks (9-2, 7-1, No. 12 CFP) need only a win over rival Oregon State next Saturday to book their ticket to Las Vegas and a date with Southern California.

Nix was clearly limited after suffering an injury to his right ankle/foot late in last week’s loss to Washington that snapped Oregon’s 23-game home win streak. He threw a 4-yard TD pass to Troy Franklin in the first half and Bucky Irving added a 10-yard TD run as the Ducks built a 17-3 halftime lead.

Camden Lewis added field goals of 30 and 41 yards for the Ducks, the second of which came early in the fourth quarter and proved to be the winning points.

Nix finished 25 of 37 passing and his own interception late in the fourth quarter proved not to be costly for the Ducks. Nix’s first carry of the night came with less than 2 minutes remaining when he faked a pitch, dived for 2 yards and picked up the clinching first down for the Ducks.

Nix entered the night the third-leading rusher on the season for the Ducks averaging more than 50 yards per game and had 14 rushing touchdowns. Lanning said the quarterback was asked before that run if he was capable of pulling off the play.

“The guy’s got heart. He cares about the game, cares about his team. I think it shows in the way he plays,” Lanning said.

Karene Reid returned a fumble 11 yards for a touchdown early in the third quarter on a failed reverse by the Ducks and sparked the Utes. Jaylen Dixon added an 18-yard touchdown run on a jet sweep later in the third quarter, but the Utes (8-3, 6-2, No. 10 CFP) couldn’t overcome an off night from their quarterback.

Rising was 21 of 38 passing, set a career-high with the three interceptions and flubbed an easy throw on fourth down in the fourth quarter deep in Oregon territory. Two of the picks came off deflected passes, but the costliest was Rising’s late throw across the middle that Oregon’s Bennett Williams nabbed near midfield with 4:15 remaining, his second pick of the game.

Utah got the ball back, but Rising couldn’t connect with Solomon Enis on a fourth-and-6 throw from midfield in the closing minutes.

“Cam didn’t seem to find much a of a rhythm like he usually does,” Utah coach Kyle Whittingham said.

Utah tight end Dalton Kincaid had 11 catches for 99 yards and was targeted 17 times by Rising. No other Utah receiver had more than five catches and Rising’s worst throw of the game may have been the fourth-down pass he threw low intended for Kincaid at the Oregon 26 with 6:54 left.

That 11-play drive was one of three long possessions where the Utes came away empty. Utah had drives of 12 and 14 plays in the first half and failed to score.

“Just wasn’t good enough,” Rising said. “Didn’t do what we needed to do to be successful, and kept shooting ourselves in the foot. I’ve got to play better, personally.”

Williams didn’t have an interception on the season but came up with two against Rising. Noah Sewell had Oregon’s other interception.

Utah: The Utes hope of getting back to Las Vegas and defending their conference title took a major hit. While UCLA’s loss to USC benefited the Utes, the Ducks only need a win over Oregon State to clinch their spot in the championship game and send Utah to a secondary bowl game.

Oregon: The Ducks were bullied last season in a pair of losses to the Utes getting outscored 76-17 in the two setbacks. Oregon’s defense limited the Utes to just 326 total yards and Utah RB Tavion Thomas was held to 55 yards on 19 carries. The Ducks gave up 522 yards in last week’s loss to Washington.

Utah: The Utes close out the regular season at Colorado next Saturday.

Oregon: The Ducks travel to Corvallis to face rival Oregon State next Saturday. 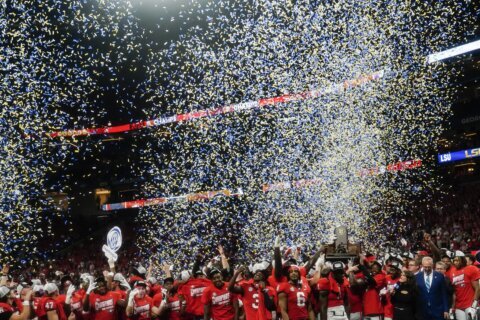