The starts by the four Pacific Northwest schools would have had all the hallmarks of an exciting race in the…
Listen now to WTOP News WTOP.com | Alexa | Google Home | WTOP App | 103.5 FM

The starts by the four Pacific Northwest schools would have had all the hallmarks of an exciting race in the Pac-12 North Division.

If only the North Division still existed.

The current Pac-12 season marks the first time that the two teams with the highest winning percentage in conference games will meet in the championship game. The Pac-12 decided to do away with divisions this year after the NCAA Division I Council changed the rule requiring conferences to have divisions to conduct championship games.

There is often a division imbalance in most conferences, but it was especially true in the Pac-12. In five of the 11 years since the conference expanded in 2011, teams from the same division would have met in the title game. In all but one of those scenarios, it would have been two teams from the North.

Even though No. 13 Utah and No. 7 Southern California command most of the attention nationally, the conference’s Northern brethren will have much to say about who plays in Las Vegas on Dec. 2. A team from the North Division has won nine of the 11 championship games.

Washington, Washington State, and Oregon State are all off to 3-0 starts, while Oregon is 2-1. The Huskies and Ducks pulled off the most significant wins last weekend, with Washington defeating No. 11 Michigan State 39-28 and Oregon beating 12 BYU 41-20.

In Kalen DeBoer’s first season, the Huskies have been the conference’s surprise team and could quickly bounce back after last year’s 4-8 campaign. Their convincing win over the Spartans propelled them into this week’s AP Top 25 at No. 18.

Washington opens Pac-12 play Saturday against Stanford but the Huskies also have an advantage down the line. With this season’s schedules still based on division play, the Huskies will not face USC or Utah.

They also have road conference games, but the most significant tests won’t be until later in the season when they visit Oregon on Nov. 12 and Washington State two weeks later.

“I think we’re bringing notoriety obviously to our programs. It tells us we have to be at our best, and that’s why we’ve got to keep improving. Those games down the road are going to be big ones, and they’re going to be against really good football teams,” DeBoer said. “Speaking out of both sides of my mouth here, it’s great to see, but it’s also an understanding that we’re going to have our hands full throughout the season.”

The following two weeks could determine Oregon State’s chances of reaching the conference title game. The Beavers host USC on Saturday before going to Utah next week. The Beavers got their first win in the Los Angeles Coliseum since 1960 last year, but the Trojans are a different team under first-year coach Lincoln Riley and quarterback Caleb Williams.

“It’s where we wanted to be,” coach Jonathan Smith said of Oregon State’s first 3-0 start in eight years. “You start the season, you’ve got a nonconference schedule, and I think we had some good play there. But the real season starts now, the first of nine conference games that we want to have the same result.”

Washington State had one of the conference’s most significant nonconference road wins on Sept. 10 when it knocked off No. 18 Wisconsin. Saturday’s game against Oregon begins a tough stretch over the next five weeks where it will also face USC, Oregon State, and Utah.

Jake Dickert is the first Cougars coach to start his first full season 3-0 since Mike Price in 1989.

“I think we’re in a great place,” Dickert said. “They have worked their tails off to get here and earned it. We’re confident in what we need to do. Our guys understand the moment. They understand the challenge.”

No. 15 Oregon has bounced back nicely after its 49-3 blowout loss to Georgia on Sept. 3 and served notice that it will still be a factor in the conference race with its three-touchdown win over BYU. After Washington State, the Ducks’ most brutal stretch doesn’t come until their last three games against Washington, Utah and Oregon State. They also do not face USC this year.

First-year coach Dan Lanning likes how his team has bounced back after the opener and has lauded his group’s ability to take criticism and improve.

“I think we’re playing a little bit more of a physical brand of football, really, on both sides of the ball, as we’ve been able to establish the run and then do a good job tackling on the perimeter the last couple of games,” he said. “The last few weeks, our practices have been really good, and it’s shown up and carried over in the game. I think we got to see the same thing this week.”

Texas A&M looks to rev up offense in trip to No. 1 Alabama 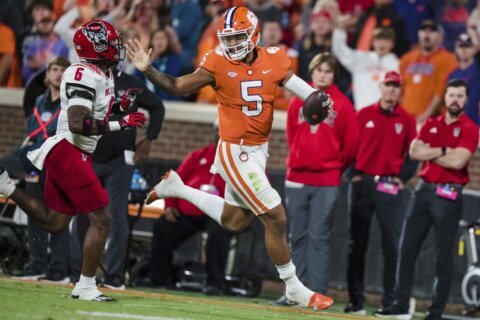