No. 1 Georgia hopes to keep rolling at South Carolina

Line: Georgia by 24 1/2, according to FanDuel Sportsbook.

Certainly, a loss of Georgia’s No. 1 ranking and a dent in the Bulldogs march to a second straight national title as a loss to South Carolina would have many reassessing the team’s championship capabilities. It would be a signature win for Gamecocks coach Shane Beamer, in his second year as a head coach.

Georgia QB Stetson Bennett vs. South Carolina’s defensive front. Bennett’s had a couple of stellar outings so far, especially in the Bulldogs’ opening beatdown of No. 25 Oregon. South Carolina’s defensive line, thought to be more experienced and aggressive this season, has struggled so far in bringing pressure with just two sacks total against Georgia State and Arkansas.

Georgia: S Chris Smith was co-SEC defensive player of the week for his performance in the opening 49-3 win over Oregon. Smith, a senior, made eight tackles and had an interception against the Ducks. He’s been a key piece of defense that’s limited opponents’ to three points this season.

South Carolina: QB Spencer Rattler threw for 376 yards in his second game for South Carolina since transferring from Oklahoma. Rattler’s yards rank 12th all-time in South Carolina single-game history and are the most since Jake Bentley passed for a school-record 510 yards vs. Clemson in 2018.

Saturday’s games marks the return of ex-South Carolina coach Will Muschamp, now Georgia’s co-defensive coordinator. Muschamp was let go by the Gamecocks in the middle of 2020 season, but was the last South Carolina coach to beat Georgia in a 20-17 OT win in 2019. … Georgia tailback Kenny McIntosh led the Bulldogs with nine catches for 117 yards two weeks ago against Oregon. … Beamer is facing off against an ex-colleauge for a third straight week. He had worked with Georgia State’s Shawn Elliott with the Gamecocks in 2010, worked alongside Arkansas coach Sam Pittman at Georgia, and for Bulldogs head coach Kirby Smart. … South Carolina is 1-9 against its last 10 ranked opponents. The lone win was a 30-22 victory over No. 15 Auburn in 2020. … Bennett is 16-3 as a starter. … South Carolina is 1-5 vs. No. 1 teams, it’s only victory a 35-21 win at home over defending national champion Alabama in 2010. 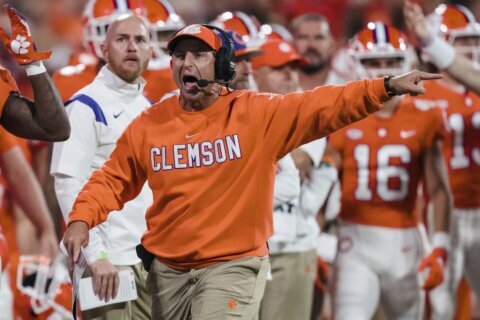