With an experienced quarterback in Taulia Tagovailoa and a talented receiving corps, Maryland has built an exciting passing attack that has won its share of games in the Big Ten.
Listen now to WTOP News WTOP.com | Alexa | Google Home | WTOP App | 103.5 FM

With an experienced quarterback in Taulia Tagovailoa and a talented receiving corps, Maryland has built an exciting passing attack that has won its share of games in the Big Ten.

Whether the Terrapins can be anything more than an afterthought to the league’s top teams remains to be seen.

Maryland is coming off a winning season and a bowl victory — accomplishments worth appreciating — but when the Terps went up against Ohio State and Michigan, they lost 66-17 and 59-18. A big home night game against Iowa turned into a 51-14 defeat.

Coach Michael Locksley is trying to keep the focus on his team — what the Terps can do to avoid beating themselves — instead of worrying too much about how formidable the competition might be.

Maryland made it to a bowl by winning the games it was supposed to win. The Terrapins went 3-0 in nonconference games and managed Big Ten wins over Illinois, Indiana and Rutgers. They finished the season strong, routing Rutgers 40-16 for win No. 6, then beating Virginia Tech 54-10 in the Pinstripe Bowl.

Tagovailoa returns after passing for a school-record 3,860 yards. Also back are receivers Rakim Jarrett and Dontay Demus. Jarrett caught 62 passes for 829 yards a season ago, leading a team that had 10 players with at least 18 catches and at least 197 yards receiving.

Demus was lost to a knee injury less than halfway through last season, but he still finished with 507 yards receiving in five games. Maryland also adds transfer receiver Jacob Copeland, who had 41 catches for 642 yards at Florida last season. And Jeshaun Jones returns after his 2021 campaign was cut short by a leg injury.

Tagovailoa, the brother of Miami Dolphins quarterback Tua Tagovailoa, finally had a chance to play a full season for the Terps after the pandemic shortened the 2020 campaign. The results were impressive. He also set school records for completions (328) and completion percentage (69.2%).

“I think the biggest next step for Lia, and he understands, is to continue to emotionally mature to where, as a leader, he doesn’t ride the wave of emotions that go within the game,” Locksley said. “Where you have the good and the bad, we want to kind of keep him at neutral.”

As good as the passing game could be, the Terps know they can’t beat the Big Ten’s best on speed alone. They’re hopeful that returning their entire starting offensive line will help.

Eastern Michigan transfer Chad Ryland arrives at Maryland with a streak of 17 consecutive made field goals. Locksley would love to see that kind of consistency from the kicking game for his team.

“Once you cross the 35-yard line, you want to be able to at least know that we have a chance to get points on the board,” he said.

Those final scores against Ohio State, Michigan and Iowa illustrate how much room for improvement Maryland has on defense, but the Terps do bring a decent amount of experience back. Sixteen players on the Maryland defense have started at least one game.

Maryland opens the season Sept. 3 against Buffalo. Its other nonconference games are at Charlotte and at home against SMU.

Big Ten play begins with back-to-back tough games at Michigan and against Michigan State. November isn’t easy either — road trips to Wisconsin and Penn State, followed by a home matchup with Ohio State. 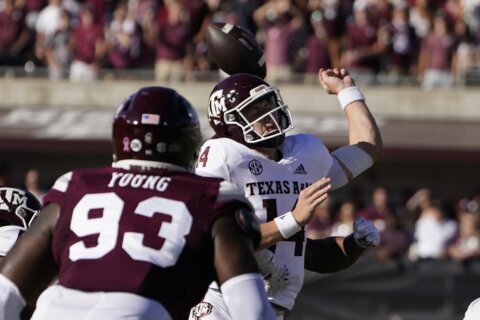