1962 — Gary Player of South Africa becomes the first non-resident of the United States to win the PGA championship.

1963 — Sonny Liston knocks out Floyd Patterson in 2 minutes, 10 seconds of the first round to retain the world heavyweight title. Liston took the title from Patterson with a first-round knockout in Chicago on Sept. 25, 1962.

1973 — Sue Berning wins the U.S. Women’s Open golf championship for the third time with a five-stroke victory over Gloria Ahret.

1984 — Seve Ballesteros wins the British Open with a four-round 276, breaking the course record set by Ken Nagle in 1960 by two strokes. Tom Watson and Bernhard Langer finish two strokes behind.

1998 — Jackie Joyner-Kersee ends her brilliant heptathlon career with a victory at the Goodwill Games. It’s her fourth consecutive Goodwill title. Earlier, the 4×400-meter relay world record of 2:54.29, set by the 1993 U.S. World Championship team, comes crashing down. Michael Johnson, the anchor on that 1993 team, anchors this United States 4×400 team, which finishes in a 2 minutes, 54.20 seconds.

2001 — David Duval shoots a 4-under 67 at Royal Lytham & St. Annes to win the British Open title, his first major championship. He finishes at 10-under 274 for a three-stroke victory over Sweden’s Niclas Fasth.

2007 — Padraig Harrington survives a calamitous finish in regulation and a tense putt for bogey on the final hole of a playoff to win the British Open over Sergio Garcia.

2008 — Candace Parker scores 21 points and DeLisha Milton-Jones adds 19 before both are ejected after a scuffle in the final minute as the Los Angeles Sparks beat the Detroit Shock 84-81 at Auburn Hills, Mich. The WNBA game turns ugly in the final seconds as a collision between Parker and Detroit’s Plenette Pierson turns into a shoving match that has players and coaches from both teams leaving the bench.

2012 — Ernie Els wins his fourth major championship in an astonishing finish, rallying to beat Adam Scott in the British Open when the Aussie bogeys the last four holes. Els, who starts the final round six shots behind, finishes off a flawless back nine with a 15-foot birdie putt for a 2-under 68. Scott was four shots ahead with four holes to play.

1921 — At the annual Harvard-Yale vs. Cambridge-Oxford meet at Harvard Stadium, Harvard’s Edward Gourdin becomes the first to long jump 25 feet. Harvard lists Gourdin’s jump as 25 feet, 3 inches, but the official listing in U.S. Track and Field is 25-2.

1966 — John Pennel pole vaults 17 feet, 6 1/4 inches for the world record in a meet at Los Angeles. It’s the eighth of nine world records he set in the event in his career and his first since 1963.

1976 — The last NFL All-Star game is held and is shortened when thunderstorms hit Chicago. The Pittsburgh Steelers beat the All-Stars 24-0.

1989 — Mark Calcavecchia wins the British Open, edging Greg Norman and Wayne Grady in a three-man playoff. Calcavecchia, the first American to win the Open in five years, birdies three of the four holes in the playoff.

1989 — Greg Lemond wins his second Tour de France with the closest finish ever, edging Laurent Fignon by 8 seconds. Lemond starts the day 50 seconds behind Fignon and wins the final stage, a 15-mile race against the clock from Versailles to Paris, in 26:57. Fignon finishes the stage 58 seconds slower.

1995 — John Daly wins the British Open at St. Andrews by four strokes in a four-hole playoff with Italy’s Costantino Rocca. Rocca forces the playoff by sinking a 65-foot putt on the 18th hole.

2000 — Tiger Woods, at 24, becomes the youngest player to win the career Grand Slam with a record-breaking performance in the British Open on the Old Course at St. Andrews. Woods closes with a 3-under 69 for a 19-under 269 total, the lowest score in relation to par at a major championship.

2006 — Tiger Woods, one month after missing the cut for the first time in a major, becomes the first player since Tom Watson in 1982-83 to win consecutive British Open titles.

2006 — Floyd Landis, pedaling with an injured hip, cruises to victory in the Tour de France, keeping cycling’s most prestigious title in American hands for the eighth straight year.

2012 — Penn State is all but leveled by penalties handed down by the NCAA for its handling of the allegations against former assistant football coach Jerry Sandusky. The NCAA imposes an unprecedented $60 million fine, a four-year ban from postseason play and a cut in the number of football scholarships it can award.

2021 — The Opening ceremony of the 2020 Tokyo Olympic Games takes place after a one-year delay due to the COVID-19 pandemic.

2021 — The Cleveland Indians announce the team will be re-named the Guardians.

1908 — John Hayes wins the Olympic marathon in a record of 2 hours, 55 minutes, 18.4 seconds. Italian Dorando Pietri is the first athlete to enter the stadium, but collapses several times before being disqualified when officials help him across the line.

1967 — Don January wins a playoff by two strokes over Don Massengale to win the PGA championship.

1976 — John Naber of the United States becomes the first swimmer to break the 2-minute barrier in the 200-meter backstroke at the Olympics in Montreal.

1976 — Mac Wilkins of the United States sets an Olympic record in the discus with a toss of 224 feet in Montreal.

1998 — Tour de France riders, angered by the drug scandal that has dominated the event, protest by delaying the start of racing for two hours. Armin Meier, a member of the Festina team who was kicked off the tour the previous week, admits to a French radio station that he used a banned drug.

2005 — Lance Armstrong wins his seventh consecutive Tour de France. All of the titles are stripped in 2012 for doping.

2008 — Nancy Lieberman makes a one-game appearance for the Detroit Shock after the 50-year-old Hall-of-Famer signed a seven-day contract earlier in the day. Lieberman, finishes with two assists and two turnovers, surpassing her own record as the oldest player in WNBA history. Lieberman held the record playing at age 39 in 1997 while playing for the Phoenix Mercury.

2009 — Ron Hornaday Jr. holds off a late challenge from Mike Skinner to win the AAA Insurance 200, making him the first driver in the NASCAR Camping World Truck Series to win four consecutive races.

2010 — Fourteen-year-old Jim Liu of Smithtown, N.Y., beats Justin Thomas of Goshen, Ky., 4 and 2 to become the youngest U.S. Junior Amateur champion. Liu, who turns 15 next month, is more than six months younger than Tiger Woods when he won the first of his three consecutive U.S. Junior Amateur titles in 1991.

2016 — Chris Froome celebrates his third Tour de France title in four years. The British rider finishes safely at the back of the main pack during the final stage, arm-in-arm with his teammates during the mostly ceremonial final stage ending on the Champs-Elysees. Froome, who also won the Tour in 2013 and 2015, becomes the first rider to defend the title since Miguel Indurain won the last of his five straight in 1995. Lance Armstrong was stripped of his seven consecutive titles for doping.

2020 — The Toronto Blue Jays name Sahlen Field in Buffalo, N.Y. as their temporary home field for the season.

1902 — Jim Jeffries knocks out Bob Fitzsimmons in the eighth round to retain the world heavyweight title.

1956 — Jack Burke Jr. defeats Ted Kroll 3 and 2 in the final round to win the PGA championship.

2007 — Michael Rasmussen, the leader of the Tour de France, is removed from the race by his Rabobank team after winning the 16th stage. Rasmussen is sent home for violating (the team’s) internal rules. The Danish cyclist missed random drug tests May 8 and June 28, saying he was in Mexico.

2010 — Alberto Contador wins the Tour de France for the third time in four years. Contador holds off a next-to-last day challenge from Andy Schleck of Luxembourg, his runner-up for a second consecutive year.

2010 — Jamie McMurray’s victory in the Brickyard 400 gives owner Chip Ganassi the first team triple crown in American auto racing: winning the Daytona 500, Indianapolis 500 and the Brickyard 400 in the same year. McMurray won the season-opening Daytona 500 in February, and Ganassi IndyCar series driver Dario Franchitti won the Indy 500 in May.

2011 — The NFL Players Association executive board and 32 team reps vote unanimously to approve the terms of a deal to the end the 4½-month lockout. The final pact is for 10 years, without an opt-out clause.

2012 — Triple jumper Voula Papachristou is kicked off Greece’s Olympic team by the Hellenic Olympic Committee for her comments on Twitter mocking African immigrants and expressing support for a far-right political party.

2015 — Maya Moore scores a record 30 points to lead the West to a 117-112 victory over the East in the WNBA All-Star Game. The league’s reigning MVP scores eight straight points in the final 2 minutes to turn a one-point deficit into a 113-106 advantage.

Arizona aiming for next step in coach Fisch’s 2nd season 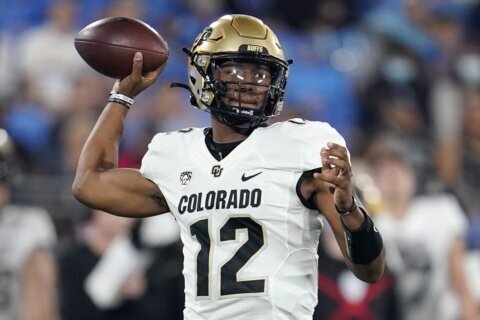 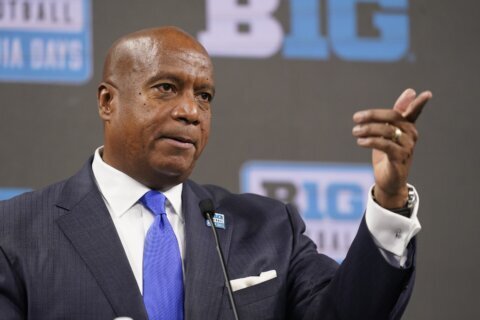