The victory sets up a clash for the Southern Conference championship next week when ETSU (9-1, 6-1) plays host to Mercer (7-2, 6-1). The Buccaneers are ranked No. 12 in the FCS coaches poll, and Mercer is receiving votes.

The second half belonged to ETSU as the Bucs scored three rushing touchdowns — a 1-yard run by Tyler Riddell, a Saylors 1-yard run and a 41-yard burst by Quay Holmes — while holding the Catamounts scoreless.

Western Carolina, which had won three consecutive SoCon games for the first time since the 2015 season, was unable to get on track after halftime, ending possessions with two punts, a turnover on downs and an interception.

Rogan Wells passed for 385 yards and four touchdowns for the Catamounts with Raphael Williams making five catches for 138 yards and a TD.

Wells had guided Western Carolina to the ETSU 3-yard line with just under six minutes remaining when his third-down pass was picked off by Tyree Robinson. 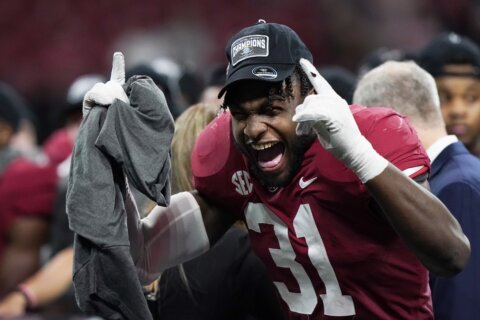