LINCOLN, Neb. (AP) — Facing mounting pressure with Nebraska on the cusp of a fifth straight losing season, Scott Frost acknowledged this year has fallen far short of his expectations.

“I thought this year it would pop,” Frost said Monday at his weekly news conference.

The Cornhuskers are 3-6 overall and in last place in the Big Ten West at 1-5 entering their home game against No. 6 Ohio State on Saturday.

A road loss to Minnesota followed by a home loss to Purdue have ratcheted up fan and media speculation that Frost is on the clock.

His hiring in December 2017 was much celebrated. He’s a native of Nebraska, quarterbacked the Huskers to a national championship in 1997 and returned to Lincoln after leading Central Florida to a 13-0 season in 2017.

Frost is 15-26 with the Huskers and has never won more than three Big Ten games in a season. Worse, they’re 6-10 against Illinois, Minnesota, Northwestern and Purdue and winless against Iowa and Wisconsin.

Nebraska would have to beat Ohio State, Wisconsin and Iowa to achieve bowl eligibility for the first time in five years.

“I think we know we’ve got to get the wins. The wins take care of everything,” Frost said. “And despite all the improvement that I’ve seen, that hasn’t improved. We’ve had a tough schedule and played some really good teams and we’ve been so close. Got to get them done.”

New athletic director Trev Alberts, a star defensive player for the Huskers in the early 1990s, has been supportive of Frost in his public comments but noncommittal about the future.

Frost, asked about speculation about his status, said, “You know, I don’t pay any attention to it. It’s kind of hard to ignore. There was an article written about me six games into my first year — we came off undefeated (at UCF) and lost our first six here — and they were already writing stuff.

“You learn as a coach not to pay any attention to that. I owe it to the kids to give them my everything. So do the coaches, and we are, and the kids are are giving us everything they got right back because of our relationship with those guys. Everything else doesn’t matter. We can only control what we can control.”

The Huskers were expected to be better this season because most of the defensive starters returned and they have a fourth-year starting quarterback in Adrian Martinez.

The defense is middle-of-the-pack in the Big Ten but has kept he Huskers in a lot of games. But Martinez has had a knack for fumbling, throwing interceptions and making other bad decisions at the worst possible times.

The Huskers are 5-18 in one-score games since 2018, and Frost has said repeatedly that he believes the program is about to turn the corner.

The waiting, he said, has been the hardest part.

“Unfortunately, you have a mindset when we got here that we’ve been beat a lot,” he said, referring to losses in six of the last seven games under former coach Mike Riley. “Winning is a habit. Losing is a habit. Trying to break that cycle. Just takes a few wins in a row. I just want to see it happen for these guys.” 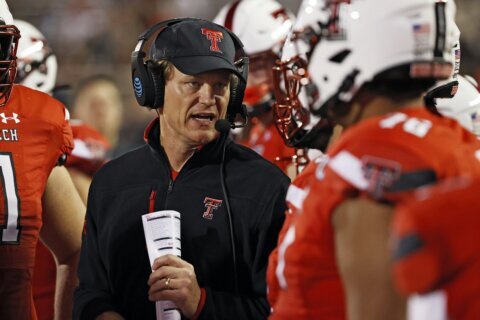