Line: SDSU by 1/2, according to FanDuel Sportsbook.

No. 21 San Diego State heads into this huge MWC showdown looking to improve to 8-0 for the first time since 1975 and keep its lead over Fresno State in the West Division. The Aztecs are also looking to hang onto the Old Oil Can in this rivalry game. The Aztecs beat the Bulldogs 17-7 in the most recent meeting in 2019.

San Diego State’s defense vs. Fresno State’s offense. The Aztecs lead the conference and are seventh nationally in scoring defense at just 15.7 points per game. Fresno State’s offense is second in the MWC and 22nd nationally at 35.6 points per game. SDSU hasn’t allowed more than 24 points in regulation this season. Fresno State has scored 34 or more points five times this season, including 40 in a stunning upset at then-No. 13 UCLA on Sept. 18 and 63 against Cal Poly of the FCS.

Fresno State quarterback Jake Haener has thrown for 2,582 yards and 22 touchdowns, with six interceptions. He threw for 256 yards and two touchdowns in a 34-32 win against Nevada last week in a showdown between the two highest-scoring teams in the MWC.

San Diego State punter/placekicker Matt Araiza is having quite a season. He has been named MWC special teams player of the week twice in a row and for the third time this season. He was a key factor in a 20-14 win at Air Force last week, punting five times for a 54.8 yard average and 50.8 net average, with a long of 81 yards.

The Aztecs return to their temporary home of Dignity Health Sports Park in the Los Angeles suburb of Carson for the first time since Oct. 9. This is the second season SDSU has played at the Major League Soccer stadium during the construction of Aztec Stadium in San Diego, which is scheduled to be finished by the start of the 2022 season. … Fresno State’s win against Nevada kept it a half-game behind SDSU and dropped Nevada to a game behind the Aztecs in the West Division. … SDSU and Fresno State have each won three MWC championships since 2012. 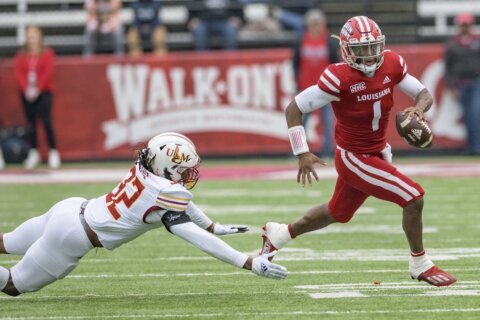 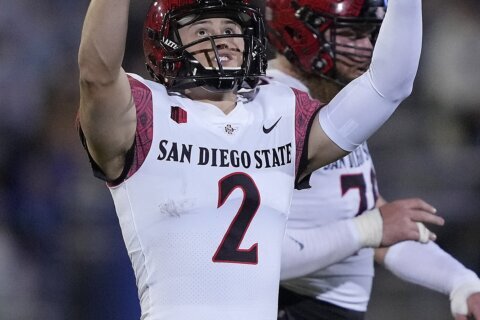 No. 19 SDSU, Utah State meet in Carson for MWC championship