PISCATAWAY, N.J. (AP) — After turning the ball over seven times in a loss to Rutgers last year, No. 11 Michigan State turned to the the big-play approach with its new cast of players. It worked to perfection.

Jalen Nailor caught touchdown passes of 63, 63 and 65 yards from Payton Thorne and transfer Kenneth Walker scored on a school-record 94-yard run as the Spartans remained unbeaten with a 31-13 victory over the reeling Scarlet Knights on Saturday.

Michigan State (6-0, 3-0 Big Ten) is off to its best start since it won its first eight games in 2015, when it reached the College Football Playoff.

“We still have multiple playmakers that y’all haven’t seen yet,” said Nailor, who finished with five catches for a career-best 221 yards, a stadium record. “We have a lot of young guys that are emerging, but it’s just getting more in tune with the playbook and we’ve just been working hard, just trying to get everybody on the same page so far.”

The loss was the third straight for Rutgers (3-3), all against ranked opponents. The Scarlet Knights fell to No. 9 Michigan two weeks ago and No. 7 Ohio State last week. Overall, Rutgers has dropped 33 straight to ranked teams since beating then-No. 23 South Florida 31-0 on Nov. 12, 2009.

Michigan State, which lost to Rutgers 38-27 at home in Mel Tucker’s debut as coach, rewrote part of its record book in the game, and one for SHI Stadium, Rutgers home.

The run by Walker, who came into the game leading all Football Bowl Subdivision players in rushing, was the longest offensive play in Michigan State history. The previous long run for the Spartans was 90 yards by Lynn Chandnois in 1949 against Arizona; their longest pass play is a 93-yarder from Tony Banks to Nigea Carter against Indiana in 1994.

Nailor’s 221 receiving snapped the stadium mark of 207 set by Larry Fitzgerald of Pittsburgh in 2003.

It was the fifth time in FBS history a team has had a 300-yard passer, a 200-yard rusher and a 200-yard receiver in the same game.

“It’s one word. Explosive,” Walker said of the Michigan State offense, which finished with 588 yards to 377 for Rutgers.

The Scarlet Knights twice had the lead early. They took a 7-0 edge on a 4-yard pass from Johnny Langan to Aron Cruickshank after their defense thwarted a fake field goal attempt on the opening series.

After the first 63-yard TD to a wide-open Nailor tied the game, Val Ambrosio kicked a 26-yard field goal to put the Scarlet Knights ahead 10-7.

Michigan State needed only five plays to retake the lead, with Nailor making an over-the-shoulder catch at the Rutgers 35 and cutting across the field to score.

A turnover set up Ambroio’s second short field goal and cut the lead to one, but Thorne and Nailor hooked up on a flea-flicker on the Spartans’ first play of their next drive for a 21-13 lead. Thorne handed off to Walker, who pitched back to the quarterback for the long scoring pass. The three TD receptions tied a school record, last matched by Cody White against Rutgers two years ago.

Walker blew the game open midway through the third quarter with his 94-yard run. He went through a huge hole, broke a couple of tackles in front the Michigan State bench and glided to the end zone, exchanging a fist pump with Nailor near the end zone.

Not only was Rutgers missing leading receiver Bo Melton with a shoulder injury, receivers coach Tiquan Underwood was not at the game because he was in COVID-19 protocol.

Michigan State cost itself points at the end of the first half. A holding penalty nullified a 10-yard TD run by Walker with 47 seconds to go. After a short completion, the Spartans let the clock run and Thorne threw an incompletion to the end zone as time expired. Referee Larry Smith reviewed the videotape and put a second on the clock.

Eric LeGrand, who was paralyzed in a football game against Army in 2010, and four other athletes were inducted into the Rutgers Hall of Fame during a halftime ceremony.

Michigan State: At Indiana next Saturday.

“The team is hungry,” Tucker said. “We still have a lot to prove and we haven’t played our best football.”

Rutgers: At Northwestern next Saturday. 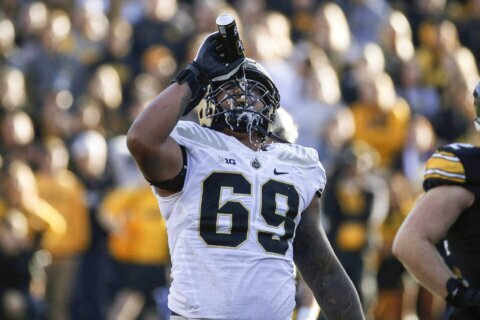 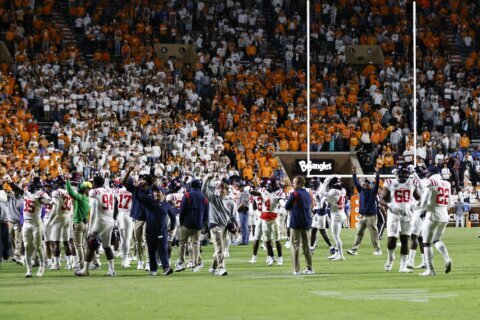